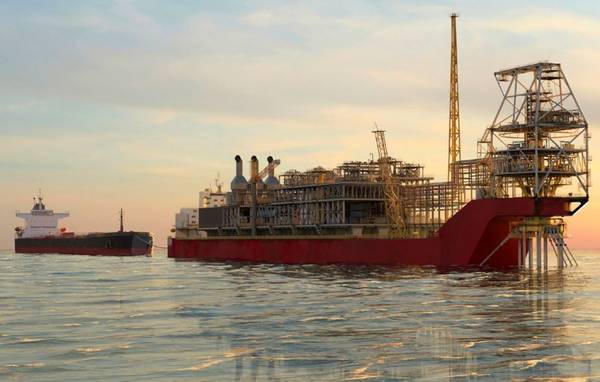 Artist impression of the FPSO for the Sangomar Field Development offloading oil to an offtake tanker / Image source: Woodside

Japanese FPSO specialist Modec has confirmed it has secured an order from Woodside for an FPSO to be deployed at the Sangomar project offshore Senegal.

The confirmation of order came Friday just after Woodside had announced its field development plan for the Sangomar oil accumulation had received final approval from the Senegal authorities.

The FPSO will be deployed at the Sangomar field located approximately 100 kilometers south of Dakar, Senegal.

Scheduled for delivery in early 2023, the FPSO vessel will be permanently moored at a water depth of approximately 780 meters by an External Turret mooring system to be supplied by Sofec, a Modec group company.

Yuji Kozai, President and CEO of Modec said: "We are delighted and proud to have been selected to provide the memorable first FPSO for Senegalese waters. We consider West Africa where numerous offshore oil and gas fields have been discovered in recent years, as one of our most important core regions, and this contract award should geographically reinforce our business portfolio.

Modec currently operates three FPSOs in Ghana and Côte d'Ivoire. It has also supplied seven other floating production facilities in Angola, Cameroon, Equatorial Guinea, Gabon, and Nigeria. The company did not provide the financial details on the Sangomar FPSO order.

The Sangomar field (formerly the SNE field), containing both oil and gas, will be Senegal’s first offshore oil development. First oil production is targeted in early 2023.