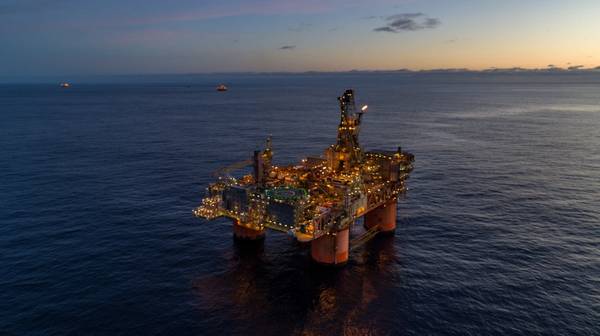 Unlocking marginal fields in the UK North Sea has led to a project comparing a global database of fields, discoveries and prospects, to clarify strategy for license holders and the supply chain alike in petroleum basins.

In 2015, a project was launched to unlock stranded and small discoveries in the UK Outer Moray Firth (OMF), one of the most prolific regions of the North Sea which is facing a dramatic decline if no further investment is committed. Unlocking overlooked marginal fields should transform the region’s fortune.

What are marginal fields?
Marginal fields can be defined in various ways, but almost always it comes back to the fact that they have barriers to investment. Small size is a common factor, but infrastructure access, access to finance and license ownership also constrain development. For most, a fundamental review of every value driver is required.

The UK Oil & Gas Authority (OGA) estimate there is 3.3 billion barrels of oil equivalent (boe) in over 300 undeveloped discoveries on the UK continental shelf (UKCS), with 1.17 billion boe identified during the OMF project (see Figure 1). In addition to the undeveloped (contingent) resources there are almost 1 billion boe in risked prospective resources. With such a big prize, how can industry make the opportunities investable?

The history of the North Sea has predominantly witnessed the development of individual assets. Notable exceptions have typically been in response to prior price crises – such as CRINE (Cost Reduction Initiative in the New Era) which was a collaborative program to simplify and standardize developments. In the OMF, a significant number of opportunities, on their own, are untenable. However, with access to a credible shared dataset of opportunities, licensees are looking to create hubs and unlock opportunities, to create real value propositions.

As an example, the OMF participants are developing a strategy for unlocking some 175 million boe (mmboe) of sour oil and 75mmboe of sweet crude in stranded discoveries. The strategy identifies the optimum solution for tiebacks to existing installations as well as areas where new clusters are needed.

Another example is using powerful visualization tools enable the opportunities to be characterized and summarized. Figures 2, 3 and 4 illustrate the size and distance of opportunities which are identified within 30 kilometers (km) of the Piper field. 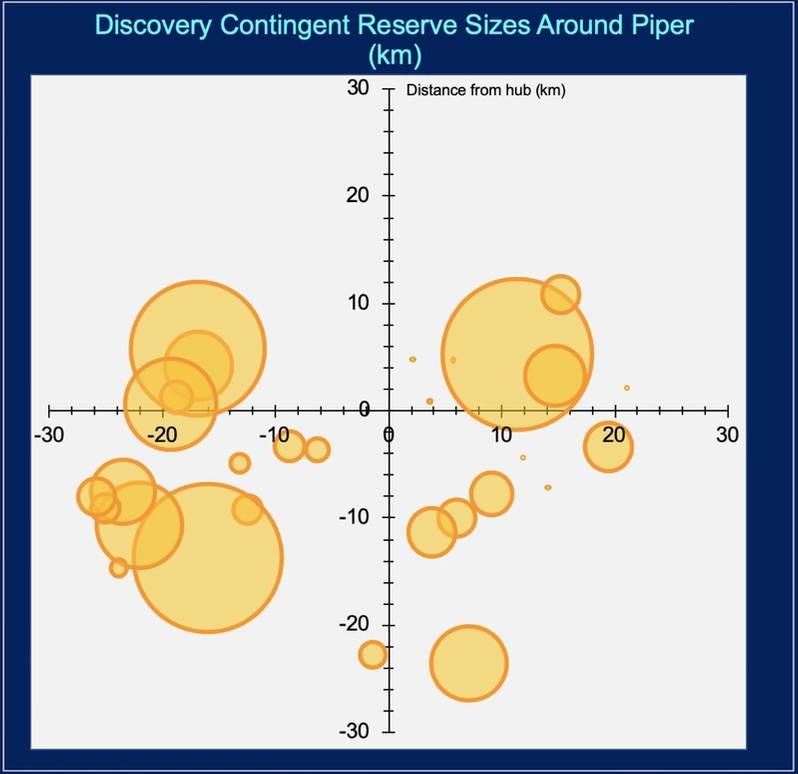 Figure 2: Undeveloped discoveries within 30km of the Piper field. The reserves scale is indicative on the plot for clarity, discovery descriptions & reserves available in TROVE. 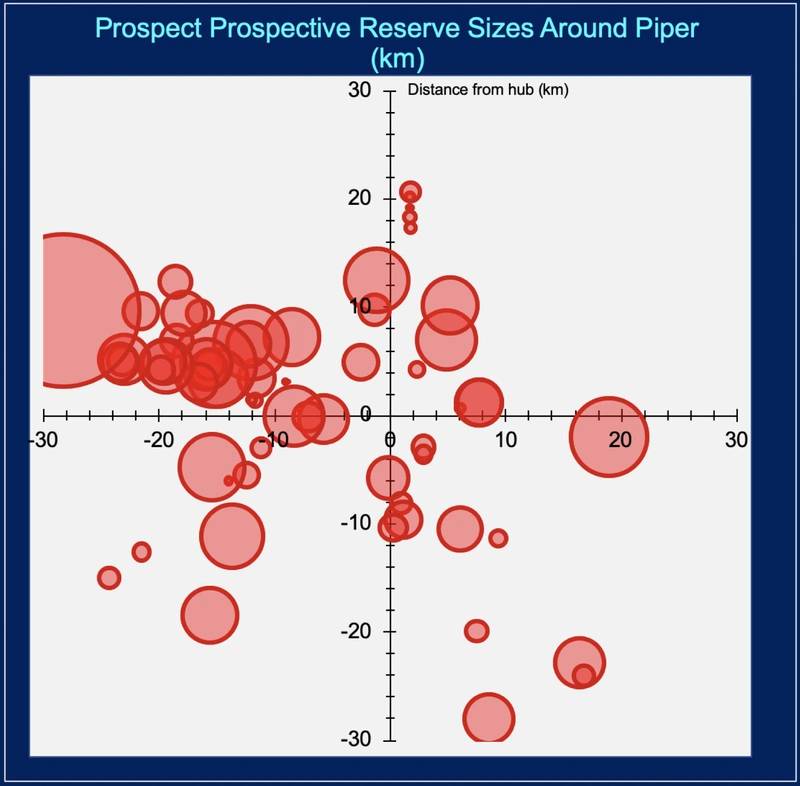 Figure 3: Prospects within 30km of Piper shown by risked resource size. The reserves scale is indicative on the plot for clarity, reserves available in TROVE. 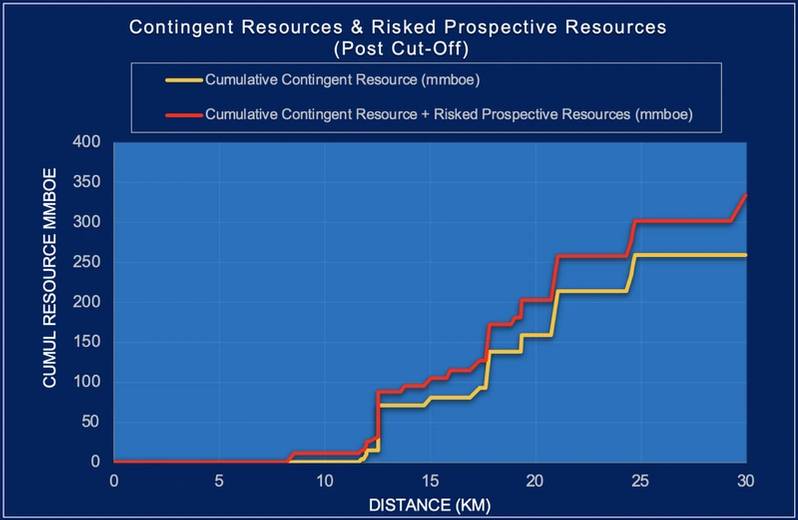 Figure 4 clearly shows the distance and quantified size of opportunities within a 30km radius of the Piper field. There are resources of approximately 250mmboe in discovered fields, with four clear “jumps” indicating sizeable discoveries. Further tools are used to discriminate fluid type, flowline size requirements and a high-level screening of the probability of flow assurance issues.

By unlocking simplification and standardization benefits, rapid “what if” evaluations, result in a transparent and consistent assessment of hub potential. For example, TROVE utilizes analog and host production performance data along with reservoir characteristics, fluid type and screening development schemes with evidence-based production profile modeling for hub screening. These may then be rapidly screened under various scenario constraints – e.g. the chosen pipeline size limits to accommodate throughput, whilst optimizing arrival temperature and pressure.

In the OMF, the principal formations occur at widely varying depths, with widely varying fluid composition and a wide range of pressures and temperatures. A different approach is thus needed.

“It’s about deciding which design options are most relevant for a hub,” says Paul Lindop, project coordinator for the OMF Special Interest Group, a consortium of major operators in the region. TROVE is used to identify which design bases are most applicable for all unsanctioned discoveries – delivering value through “design once, use many”, taking everything from single well natural flow through to multiple wells with water injection and gas lift. Once screened and ranked the most value adding design bases can be taken through a front-end engineering study to provide the foundation of a “development playbook” for the basin.

What are the benefits of designing for a portfolio?
Working over a portfolio with simplified designs and standardized equipment reduces deployment cost, ownership cost and project risk – improving project economics. This effectively reduces the minimum economic field size hurdle. By utilizing reusable equipment, the cost is further reduced. Designing for reuse is one of the principles behind the UK’s Oil & Gas Technology Center’s (OGTC) Tie Back of the Future initiative. The OGTC is actively collaborating with the OMF participants to make such initiatives happen.

The approach is equally relevant for an existing installation looking to form a strategic plan to exploit satellite resources or a new hub where there is insufficient existing capacity or limited remaining field life at the existing hub.

For an emergent hub, the tools are the same but by optimizing new hub locations, strategies can be formed by the participants based on shared data optimizing all assets within the capture area.

Finally, Figure 5 shows the field size distribution in the deepwater and ultra-deepwater of the US Gulf of Mexico. Thirty-nine fields of less than 10mmboe have been sanctioned at these water depths. This seems a far cry from the North Sea where 10mmboe has historically been mooted as a lower limit for materiality and economic development. Though such fields have been developed in the North Sea and continue to be considered for development, there are certainly lessons to be learnt when deepwater challenges can be overcome to develop economic investments, compared to the generally much shallower North Sea equivalents.

The costs associated with deepwater drilling and increased capital for deepwater infrastructure and deployment has clearly not hindered significant numbers of projects beyond the continental shelf in the US Gulf of Mexico.

Conclusions
There is huge potential in unsanctioned discoveries in the UK and globally. TROVE is used to unlock stranded resources by conducting rapid screening analyses and evidence-based strategic planning at a portfolio scale. License holders and the supply chain unlock value through simplification and shared standards driven by real data; in a collaborative process and achieving this through an auditable database of field, discovery and prospect data feeding tools to analyze remaining reserves at existing UKCS hubs.

Figure 6: A list of OGM fields reported to have less than 10 million BOE at sanction

The author
Mike Cooper is Managing Director of Aberdeen consultancy 1st Subsurface specializing in technical subsurface and infrastructure analogue databases. Mike was formerly Exploration & Subsurface Manager for several companies including Lundin, Centrica, EnQuest and Kerr-McGee. Mike is acting CEO of Arenite Petroleum Limited and a former director of PESGB, during which he founded the Devex & jointly founded the Prospex conferences. Mike graduated 40 years ago from Leeds & Newcastle University with degrees in Geology (BSc) & Petroleum Geochemistry (MSc).