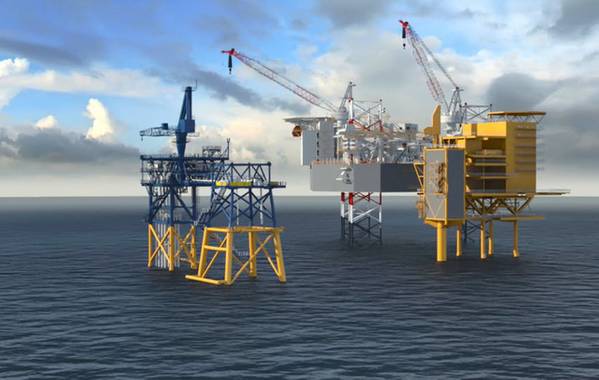 A temporary tax incentive regime, low oilfield breakeven pricing and a chance to profit on modifications alone rather than via drill bit appear to be factors lifting prospects and getting banks behind a stalled Danish offshore revival.

On Monday, Norway-based Denmark player Noreco announced it had secured bank backing for its plan to overhaul the $2.54 billion Tyra re-development in the Danish North Sea by replacing two accommodation platforms and a processing platform with one of each type (plus raised jackets on other platforms). The project also envisions activating a tie-in well, but no new drilling.

Tyra is the gas processing hub that delivers 90% of Denmark’s gas production. Closed from now to 2020, it has and will again supply the Dutch gas network.

It’s part of an increasingly attractive Denmark as seen by institutional investors, and Noreco’s CFO on Monday could disclose new loan terms secured on oil and gas in-place: in fact, 100 million barrels of oil equivalent will be newly producible at the Tyra field without the need for further drilling.

There’s also a new, temporary (to 2025) tax incentive for offshore oil companies that provides up to 20% on depreciating assets. “Low” oil prices are the reasoning for other tax relief until 2022.

With the risk removed — and with breakeven OPEX at Tyra down to as low as $13 by restart in 2022 — a slew of banks agreed to renegotiate Noreco’s $900 million facility to allow the Oslo-based E&P player freedom of action to the tune of $30 million to $50 million a year. Noreco’s partner at Tyra is Total and an investment fund, and that, too, can only have helped secure lending against gas in the ground.

“The (changed loan terms) are expected to increase the maximum amount available to Noreco … as well as increasing the amount of additional permitted financial indebtedness from $100 million up to $300 million,” a company note to investors said.

Shares in Noreco and many of its Norway-based suppliers soared in mid-day trading on Monday. Noreco’s share prices was up over 5%, as investors were shown the high-reward aspects of Tyra and funds to help pay suppliers.

The field also lies in Denmark’s Sole Concession Area, of which Noreco is license holder and 36.8% partner in the Dansk Undergrunds Consortium, or DUC (Total 43.2%, Nordjsofonden 20%).

Transformation
The good news is just part of a transformation in the wind-strong Danish offshore sector. Shell and Chevron’s departure and then the Maersk conglomerate’s exit from oil and gas seemed to signal the collapse of oil and gas offshore Denmark.

But an about-face of by the Danish government and its industrial conglomerate champion, Maersk, and the entry into Denmark of France’s Total, changed things. The Danes reformed their offshore regulation (under EU rules) and their support for offshore oil and gas: Total bought Maersk Oil and Gas, and now cooperation on rigs and wind power might make sense.

Total instantly declared it could book 500,000 North Sea boepd by 2020, and it was closer to its oil and gas reserves — physically. Jack-up rigs are all you need in Denmark’s shallow waters, and Danish Maersk Drilling appears to have the best of those, too.

Already, the Maersk Resilient has set a new workover-drilling completions benchmarks for new Danish client, Total (newly headquartered in Denmark). By changing procedures, the total time for rigging up and pressure testing coil tubing equipment was cut in half; a faster way to handle surface trees by cantilever skidding was also introduced.

With these tax, completion-time, OPEX and drill risk cuts, the rot in Denmark may have been removed. Quietly, too, there’s new seismic afoot, and the Danish Offshore Agency says Lundin Norway, MOL Dania and Ardent Oil have shown new interest, while Hess and DEA plan 2020 wells to cap a 9th Licensing Round.