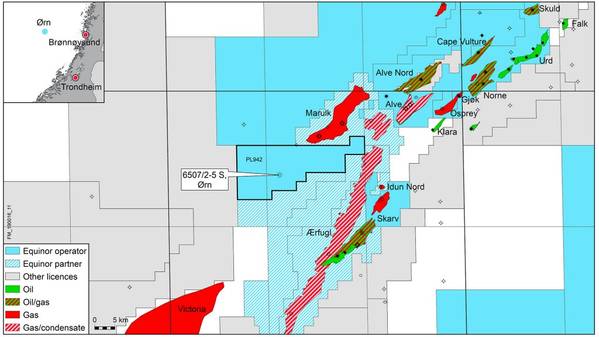 Norway's Equinor has discovered a gas field in its Eagle prospect in the Norwegian Sea, the energy company said on Tuesday, adding that it plans to extract resources via existing platforms in the area

The company discovered the gas field along with Norwegian partners Aker BP and Wellesley Petroleum.

The field is located south-west of the Marulk field, Equinor said, while it estimated gas resources to about 50 million barrels–88 million barrels of oil equivalent (boe).

Norway is Europe's second-largest supplier of natural gas after Russia.

"The discovery follows several discoveries we have made in the same area during the past years, adding considerable volumes in an area with an already developed infrastructure," said Nick Ashton, Equinor's head of exploration in Norway and Britain.

The location near existing platforms and other discoveries will make it profitable to develop resources, he added.

Since 2017, Equinor has been an operator or partner in several discoveries in the Norwegian Sea, totalling an estimated volume of 200 million-650 million boe, the company said.

Equinor will hold a 40% stake in the latest discovery, while Aker BP and Wellesley each have 30%.