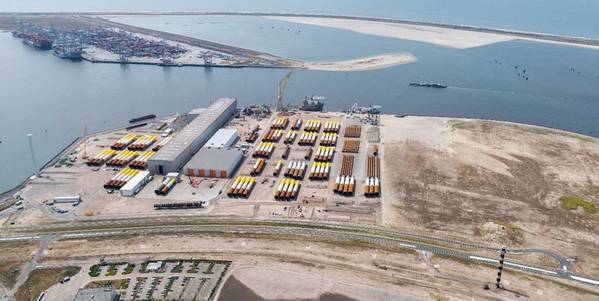 The Port of Rotterdam Authority has made a strong commitment to the energy transition and aims to establish Rotterdam as Europe’s leading port in offshore wind and the offshore sector in general.

The Port has reached an agreement with Sif Holding, where the latter already works on the assembly of foundations for offshore wind turbines.

Sif Group’s decision to establish and further expand its location in the port contributes to the ambition. Together with its partners, the Port Authority will be working hard to promote offshore wind as the premier source of renewable energy. It will be focusing on a number of activities in this context: innovation, testing & demonstration, promotion and lobbying.

Sif will be using the newly allocated site on behalf of clients active in the offshore wind power sector. The first project to be undertaken at the new site will be the logistics handling of all 94 monopiles (wind turbine foundations) destined for the offshore wind farm Borssele 1 + 2, commissioned by Deme Offshore.

Allard Castelein (Port Authority CEO) said: “We are proud of Sif Group’s success in our port. Since the company set up here in 2015, Rotterdam has been able to strengthen its position in the offshore wind segment. This expansion will allow a leading player in this market to develop further. It supports our policy to employ our expertise, space and developing capacity to stimulate the offshore wind segment – and the offshore sector in general – as a key growth market.”