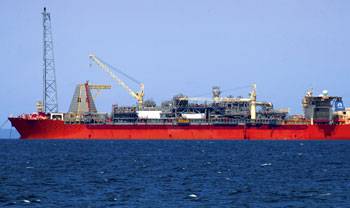 The SeaRose FPSO is located in the White Rose oil and gas field, approximately 350 kilometers off the coast of Newfoundland, Canada in the North Atlantic. (Photo: Husky Energy)

Canada's Husky Energy said on Friday it will resume full production at its White Rose field off the coast of Newfoundland & Labrador, which was shut down last year after an oil spill in November 2018.

White Rose production will ramp up to reach full rates of approximately 20,000 barrels per day, net to Husky, by early next week, the company said in a statement. Husky owns 72.5 percent of the field and Suncor Energy owns the remainder.

Last year's spill of 1,572 barrels of oil was the largest ever recorded off the coast of the eastern Canadian province, the regulator Canada-Newfoundland & Labrador Offshore Petroleum Board said.

It was caused by a failed connector on an underwater oil flowline, which came apart during startup operations, a Husky investigation found.

"We regret the spill last year," Husky CEO Rob Peabody said in a statement. "As a result of our investigation, we've enhanced our startup procedures, strengthened equipment and added more barriers to prevent failures."

The company installed a replacement connector with a higher load capacity in July and has submitted an investigation report to the regulator.

(Reporting by Shariq Khan in Bengaluru and Nia Williams; Editing by Maju Samuel)