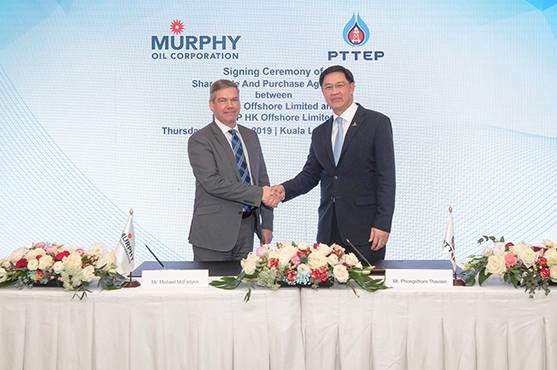 US-based independent Murphy Oil said it has completed the sale of its oil and gas assets in Malaysia to a subsidiary of Thai company PTT Exploration and Production (PTTEP).

The transaction was announced in March 2019, with an effective economic valuation date of January 1, 2019. After closing adjustments, Murphy will receive proceeds of approximately $2.035 billion, and expects to report a gain on the sale of approximately $1 billion. Murphy said it does not anticipate tax liabilities related to the transaction.

Murphy, which also has operations in Canada, Brazil and other regions, said it plans to dial in on the Western Hemisphere, including Texas' Eagle Ford basin and the U.S. Gulf of Mexico. Last month the firm completed its $1.227 billion acquisition of deepwater Gulf of Mexico assets from US-based LLOG.

Murphy also announced on Wednesday that it has completed $300 million in share repurchases as of the end of the second quarter, which is part of a previously authorized and disclosed $500 million program. Murphy purchased 11.4 million shares outstanding, a 6.6 percent reduction from 173.6 million shares outstanding as of April 30, 2019, at an average price of $26.34 per share. The current share repurchase program expires year-end 2020.

“Murphy remains committed to spending within cash flow while investing in our new Gulf of Mexico assets. We continue to strongly support our shareholders with industry-leading dividend and share buybacks this year. Murphy’s recent transactions further align our high-margin and oil-weighted production, with approximately 90 percent of oil volumes expected to receive premium realizations to WTI,” stated Murphy President and CEO Roger W. Jenkins. “We have repositioned our portfolio with multiple successful transactions while maintaining our strong balance sheet and liquidity position. Following our three major transactions over the last nine months, we are now set up for a transformed future with no revolver borrowings and liquidity of more than $2 billion.”