A Boost for South Africa Offshore 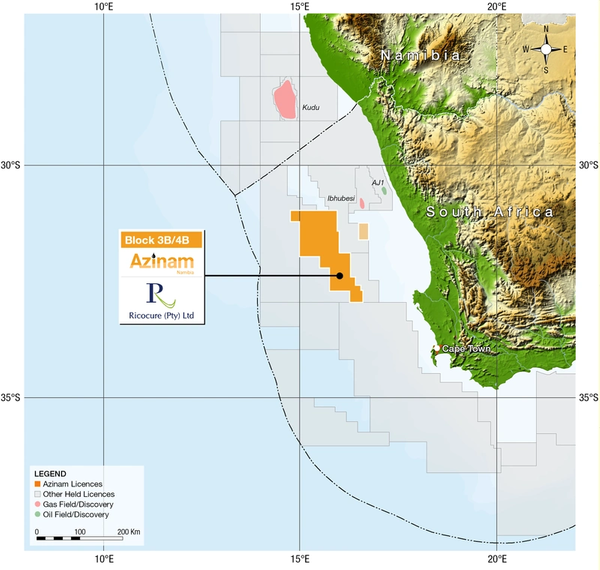 Canadian oil and gas exploration and production company Africa Oil Corp’s subsidiary Africa Oil SA Corp has become the latest upstream investor to announce progress in offshore South Africa after successful negotiation and signing of a definitive agreement with Capital-backed South West African-focused oil and gas company Azinam for a 20% participating interest in Block 3B/4B Orange Basin. Africa Oil said in a statement on Wednesday that the agreement with Azinam “is subject to customary regulatory consents.”

Under the new deal, Africa Oil will be the operator of Block 3B/4B, which covers 17,581 square kilometers and lies in water depths ranging from 300 to 2,500 meters, while Azinam will retain a 20% participating interest post completion according to the statement.

The share for Ricocure Limited, a partner in the license, shall remain unchanged at 60% as Block 3B/4B partnership puts final touches in the planned regional subsurface review of existing seismic, geological and engineering data.

In addition, the partners in the block, which extends 120 to 250 kilometers offshore in the Deep Western Mid-Orange Basin of South Africa, are likely to “reprocess parts of the existing 3D data in order to high-grade the exploration prospects on the block.”

“This extensive block lies at the center of an exciting emerging exploration play which is being actively pursued by the international oil and gas industry and partnering with Africa Oil on the Block 3B/4B brings extra resources, complementary experience and technical expertise to the block’s initial period exploration program,” he said.

The Azinam farm-in in Block 3B/4B adds to the progress of South Africa’s offshore oil and gas resource development that started early in the year with the Brulpadda discovery in Block 11B/12B, which French oil major Total said “was drilled in a challenging deepwater environment”. The discovery, with an estimated one billion barrel of crude reserves is South Africa’s first deepwater discovery.

With the discovery, Total with a 45% working interest and its partners, Qatar Petroleum (25%), CNR international (20%) and Main Street, a South African consortium (10%), are in the process of acquiring 3D seismic ahead of drilling up to four exploration wells in the license that covers 19,000 square kilometers in water depths ranging from 200 to 1,800 meters.

The progress in South Africa’s upstream investment comes at a time when the Department of Mineral and Petroleum Resources Development is pushing for the finalization of the country’s Upstream Petroleum (Oil and Gas) Bill to smooth the investment environment for international upstream investors keen on joining in the search for oil and gas that the country desperately needs to reduce its crude oil import bill.

Mineral Resources and Energy Minister Gwede Mantashe said in February the passage and promulgation of the Bill has been held back by the government decision to withdraw from Parliament the Mineral and Petroleum Resources Development Amendment Bill, to allow time for the document to be restructured to separate oil and gas from mining legislation.

He said the proposed bill will provide “certainty to the upstream petroleum industry and stimulate growth and development in this sector”.

The bill “will further provide regulatory certainty to the upstream petroleum industry and stimulate growth and development of this sector,” Mantashe said.

However, it is not certain when the draft law will be tabled in Parliament again, but Mantashe has been quoted saying early this year South Africa needs “to speedily work to entrench regulatory and policy certainty.

”Despite the delayed passage of laws to govern South Africa’s upstream segment, international oil and gas explorers and producers continue to express interest in the country’s offshore hydrocarbon reserves.

“Following the Brulpadda discovery earlier this year, momentum is building in the South Africa and Namibia exploration scenes, with several key wells to be drilled by industry in the coming year,” said Azinam’s McKeown.