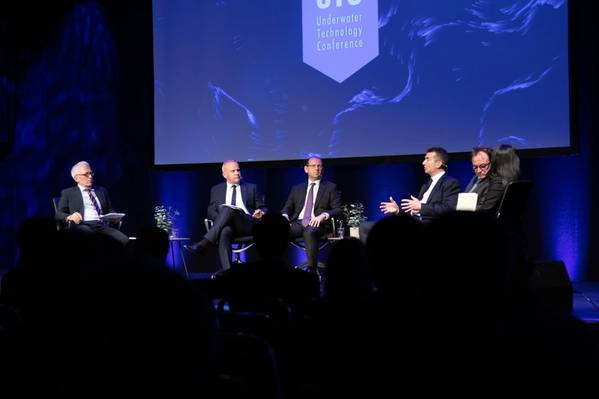 The huge changes made in the industry since the downturn in 2014, through to the challenges that lay ahead and some of the solutions that could help solve them, were set out by a top tier line up ranging from oil major heads of macroeconomics to the engineers coming up with the solutions at this week’s Underwater Technology Conference (UTC) in Bergen.

For Anders Opedal, EVP TPD at Equinor, the industry has come a long way since his last visit to the conference in 2014. Today, there’s talk of remote unmanned fields of the future. “(Back in 2014), I talked about the need for simplification of subsea equipment due to increasing cost,” Opedal told UTC during his keynote speech this morning. “The oil price was $114/bbl. It was not an easy message to sell. Two weeks later, the oil price collapsed.”

Today, there’s still very much a need for cost discipline. We’re in a cyclical industry and we must be prepared for the next downturn, he said. That means leveraging cross disciplinary teams with deep knowledge and using digital technology.

“Digital opens new ways of operating, providing step change improvements in efficiency and unplanned down time,” he says. “Automated drilling control will be installed on 16 rigs in 2019 offering potential to reduce drilling cost by 15%. Automated production optimization will be installed on 14 fields in 2019, with the potential for 2-5% higher production per field.”

Equinor also has a long-term vision; the field of the future, or the Remote Operated Factory. “This idea was sparked by the need to bring cost down and enforced by the oil price reduction. It led to a common sense of urgency that made us think harder, work better and come up with radical innovations.

“In the future, we will build lighter and smaller installations that can be unmanned, robotized and remote controlled from land. This forms the basis of the field of the future. Safer, more profitable and with lower emissions. If we succeed, the energy production will be safer, more profitable by significantly reducing capex and opex, and with lower emissions. Compared with conventional solutions, emissions can be close to halved.

“We see this as a good solution for the NCS and the UK sector. But we believe that we can use this concept also in ultra-deep water in the Gulf of Mexico and offshore Brazil, maybe within the next decade.

“The subsea factory is in many ways a toolbox for us, from which we can pull existing technologies. This enables us to put together system solutions that are fit for purpose. We ‘mix and match’ technologies in the toolboxes to make an optimum development. This way we are able to cut capex by 30%, opex by 50% and CO2 emissions by 50%, compared with conventional development options.”

The market outlook
Efforts to keep cost discipline, to maintain the drive for simplification in subsea cannot afford to relax, however.

The biggest threat to subsea development isn’t unmanned wellhead platforms or, at least in the near term, climate change. It’s the ability to be competitive with shale production, Mhairidh Evans, analyst at Wood Mackenzie, told one of UTC’s technical session tracks this morning.

Evans says, “75% of pre-FID barrels that will be produced over next decade or so will come from US Lower 48.” Subsea needs to compete with this. Deepwater is doing well, having made a remarkable improvement in breakeven costs to $50/bbl, making 30 billion boe of resource “in the money” at $50/bbl.

The Permian Basin hasn’t been idle either. From about 8 billion boe being viable at $50/bbl not that many years ago, today, there’s some 65 billion in money at $50/bbl, “equivalent to all of what Norway has. All the big players we’re used to seeing in the subsea world now have a place in the Permian Basin.”

Still, the subsea business is showing signs of improvement. From a 20+ year low for subsea tree demand in 2016, there’s been a level of recovery. “This year and coming into next is the real test of whether we see a recovery,” says Evans, with focus on areas like the Gulf of Mexico and Brazil but also new basins like Guyana.

Mega projects will be more likely to be phased and all new projects will be determined by three pillars – is capex manageable, does it pay back well, and can I rely on its efficiency – will it execute well? says Evans.  “A vast majority of projects, 10-12 wells, will be sanctioned in one main phase. As soon as you get above 20 wells, projects become multiple phases.”

Solutions
Some of the solutions have been outlined in today’s multiple technical sessions, which run across three tracks. Just a few of these sessions have ranged in scope from being able to do more with today’s technologies, by pushing the envelope, to entirely new technologies that the industry is now preparing to pilot.

Shell and OneSubsea, for example, presented detailed analysis on how step-out distance for a subsea boosting project could be expanded from today’s 44 kilometers to 120 kilometers, using low frequency power transmission, minimizing the need for using marinized power equipment on the seafloor.  The study was done to inform Shell’s decision making on its Ormen Lange field, where subsea compression would enable increased recovery rates.

Meanwhile, Equinor’s new Remote Operated Field concept was outlined, offering a new vision for how the industry operates, based on smaller facilities, potentially even using the spar base developed for the Hywind offshore wind project as a minimal topside support, alongside production facilities including subsea processing, storage and injection technologies on the seafloor.

Total outlined how it designed and created a new tool in just 10 days using subsea printing in order to remove hydrate from a pipeline end that it wished to tie in to. Without a bespoke tool to enable the injection of methanol, the pipe infrastructure would have had to have been removed, leading to a costly offshore campaign. Instead, engineers in Nigeria, on the Egina project, were able to design a tool, email the design to engineers in France who then optimized it, making the most of the topologies achievable with 3D printing, printed it and then sent it to Nigeria, where it successfully solved the problem. This is just the start for this type of engineering, says Hugues Greder, from Total, who presented the paper.