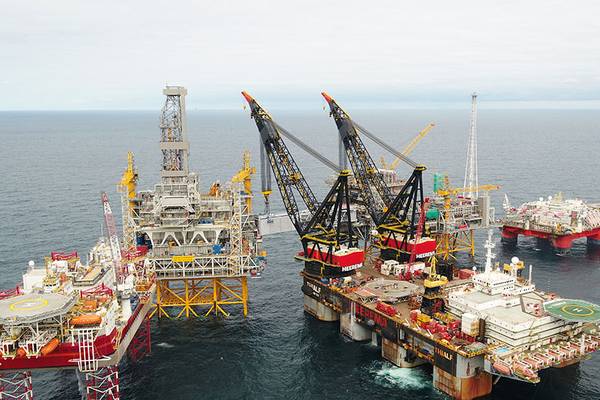 Whatever its investments in wind, Equinor on Monday received a much anticipated greenlight to drill for oil in a mature quadrant of the North Sea, where success with the drill bit could again change field economics for the giant Johan Sverdrup field — and other, area oilfields.

Sverdrup is the largest new Norwegian discovery of the past 20 years. It’s the largest field development since the 1980’s, and a second phase of oil production will see the project(s) reach 660,000 barrels of oil per day, up from Phase 1’s 440,000 bpd.

The $9.3 billion Phase 1 yielded 61 billion kroner ($7 billion) in contracts for about 1,000 suppliers (field center and processing platforms), and now Phase 2 (process platform, subsea wells and power from shore) will cost NOK 41 billion ($4.71 billion). Yet, well 16/5-7, just to the southwest of Sverdrup — a true cash cow — in an area where new exploration models have yielded a range of prospects (this week alone produced a $80.4 million Sverdrup contract for “insulation, scaffolding and surface treatment”).

From the beginning, all eyes have been on Svedrup “and nearby acreage”, even as Phase 2 will introduce a processing platform intended for more volumes from area satellite discoveries Avaldsnes, Kvitsoy and Geitugen. There’s also riser modifications; five subsea arrays and power-from-shore planned for the substantial Edvard Grieg, Ivar Aasen and Gina Krog fields.

Some of the area acreage belongs to Lundin Petroleum. Last year company leadership told journalists in Stavanger and Oslo of the Rolvsnes find nearby and of the Goddo prospect, and that the region might, according to their new geological model, hold another 250 million barrels of oil.

Equinor says it plans to run Johan Sverdrup for 50 years, and this latest drilling permit suggests “shareholder value” in that time might come from acreage now just a colour on a map but touted by Equinor, Lundin, stately Petoro and officials. When the Transocean Spitzpbergen takes up its position in License 502, the wildcat will feel more like an appraisal.

Elephantine
The acreage around Sverdrup already contains many of the large new discoveries of the past decade, many of them made by Lundin Petroleum’s brain trust, including Sverdrup. Now, Aker BP and the state’s direct ownership entity, Petoro, will also seek to improve their breakeven from Svedrup’s “23 to 35 cents” a barrel, a sure thing if area reservoirs are found to be in contact with or connectable to Sverdrup or any of the named others.

Sverdrup is just three kilometers to the northeast of the exploration well 15-5/7. To the northwest lies the Ragnarock oil and gas find; the Edward Grieg field and the Rolfsnes reservoir; a little to the southwest, there’s the Luno II field.

Well 15-5/7 is surrounded by Norway’s most prospective acreage.

So, what does the Norwegian Petroleum Directorate know about the geology in the area? What is Equinor targeting, exactly?

“We know many things about many things. (The area geography) is not anything we want to say anything about,” an NPD staffer told OE Digital. He referred us to a press officer.

After over 15 years of oil and gas coverage in Norway, one translates silence as giddy anticipation, or that a big new discovery is in the works. Equinor, we noted, traded higher as the permit was made public.

News of discovery
With Phase 1 of Sverdrup 90 percent built, Equinor was given the nod by parliamentarians for its Phase 2. The fabrication of Phase 2’s 25,000-tonne processing platform (Sverdrup’s second) had only just started in Haugesund, where 1,500 people were put to work getting it ready for 2022, when its onboard transformer will start powering nearby platforms.

Phase 2 will see shore power distributed to the Edvard Grieg, Gina Krog and Ivar Aasen fields, all, like Svedrup, in an area called Utsira High, or Norway’s relatively new petroleum “tenderloin”. Locking in prospective spoils at well 16/5-7, should there be any, could grow Sverdrup’s neighborhood into a giant new sweet spot that could help Oslo coast through the politics and price instability forecast over the next 30 or 40 years.

To be sure, new Utsira area discoveries seem likely. They also seem likely to change things, from the supply of hydrocarbons to cost calculations on area platforms and supply chain usage.

So, expect news of a great new Equinor or Lundin discovery this year. Then wait for news of a new offshore bonanza. Both seem … likely.