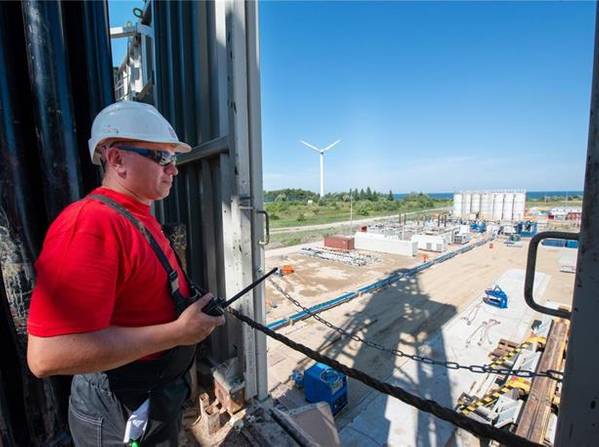 The D41 offshore field is operated from an onshore site (Photo: Lukoil)

Russian oil company Lukoil said it has commenced commercial operation of two wells at D41 offshore field in the Baltic Sea. Construction of one of the wells finished on February 6, 2019, the other was completed on May 7, 2019.

The field is operated from an onshore site with two newly drilled horizontal wells, one of which is 7,947 meters long and has a horizontal section of 616 meters. The other is a 7,517 meters long well with a horizontal borehole as long as 439 meters.

Though with wells of that length Lukoil sets the record for the fields in the Baltic Sea, the company has already built similar wells at the Yury Korchagin field in the Caspian Sea, where the longest well is 8.05 kilometers.

LUKOIL started to develop offshore Baltic fields in 1995. Kravtsovskoye field (D6) was commissioned in 2004. Exploration and appraisal drilling at D41 was performed from a jack up rig in 2014. Upon registration of the production license for D41 field by Russia’s Ministry of Natural Resources and Environment on April 22, 2016, the active phase of the investment cycle started in November of 2017. Operational drilling commenced on August 2, 2018. It is planned that D33 and D6-South fields will be commissioned after 2020.