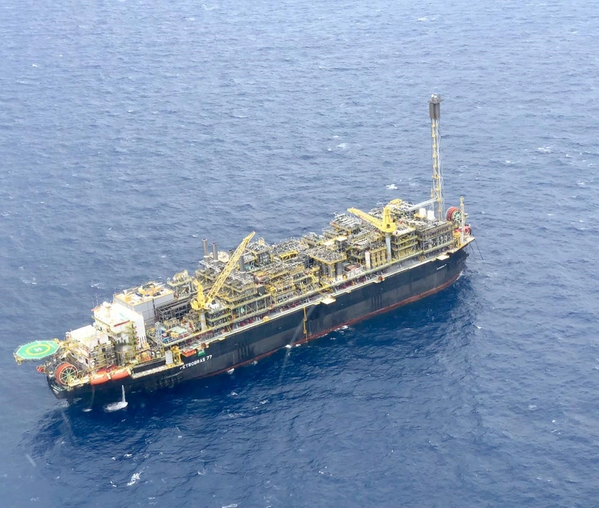 Brazil's government will announce "within days" a deal with state-run oil company Petrobras to settle a multi-billion-dollar contract dispute and clear the way to auction billions of barrels of oil off of the Brazilian coast, a minister said on Monday.

Economy Minister Paulo Guedes told journalists that his team sat down recently with officials at the Mines and Energy Ministry, and that "the deal is done."

Reuters reported earlier on Monday that Petroleo Brasileiro SA, as it is formally known, and the government had "practically agreed" on the size of a multi-billion-dollar payment to Petrobras to settle the fight, according to a source with knowledge of the matter.

According to the source, who requested anonymity to discuss private talks, negotiations have turned to the terms of an oil auction for the excess oil in the so-called "transfer-of-rights" area in the Santos Basin, which will follow a formal agreement.

Guedes did not go into details about the accord, and the source declined to comment on the exact value that Petrobras would receive from the government.

However, Senator Fernando Bezerra Coelho, who leads the government coalition in the upper chamber, said last week that the two sides were closing in on a value of around $9 billion.

The company could also receive nearly the same amount from winners of the auction to compensate for exploratory and infrastructure work it has done in the basin.

The transfer-of-rights dispute dates back to a 2010 deal between the government and Petrobras regarding a huge share sale by the company that would have diluted the government's stake.

To maintain control of the company, the government got new shares in return for granting Petrobras the rights to extract 5 billion barrels of oil in the area off Brazil's coast for 74.8 billion reais, or about $43 billion at the time.

However, a dispute over the terms of that transaction have left both sides debating additional compensation for years.

Until fairly recently, the two sides were tens of billions of dollars apart. Petrobras had claimed that it was owed as much as $30 billion, while some officials said Petrobras in fact owed money to the state.

Officials have since said that gap has narrowed. Now, according to the source, the gap is effectively closed, with both sides focusing on the terms of the ensuing auction.

Brazil's oil regulator estimates there are around 6 billion to 15 billion barrels of recoverable oil in that area, in addition to the 5 billion granted to Petrobras. The government aims to auction rights for extraction of the excess oil once it resolves the long-standing dispute.

Petrobras did not immediately comment, nor did Brazil's Mines and Energy Ministry. Brazil's Economy Ministry, which is also involved in negotiations, declined to comment.

Reuters reported late last year that the government expects the firm to receive 30 billion reais ($7.8 billion) or more in compensation from winners of the auction for work it has done, in addition to the payment it will receive from the government. However, the exact amount Petrobras will get from the winning bidders is still under discussion, according to the source.

The source estimated that an agreement may be ready for publication around mid-April, roughly in line with public estimates by officials involved in the talks.