Oilfield Services Have to Wait till 2025 For Recovery 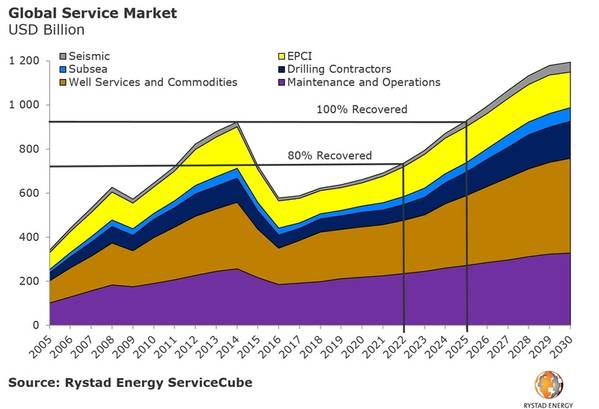 The global oil service suppliers might have to wait until 2025 before the market reaches its former glory seen before the oil price collapsed.

For drilling companies, it will take even longer, says analyst firm Rystad Energy.

"The global oilfield service sector’s recovery from the deepest trough it has ever encountered is not going to happen overnight. Not until 2025, 11 years after the last peak, are global service market revenues again likely to have made it back to the $920 billion mark seen in 2014," said a report from the energy research and business intelligence company.

“This will be the longest slump faced by the oilfield service industry since the 1980s, with about $2.3 trillion in revenues lost along the way,” says Audun Martinsen, Rystad Energy’s head of oilfield service research.

He added: “On the bright side, in only three years’ time, activity levels will be higher than they were in 2014, although the cost cuts achieved in the sector means spending levels will only be 80% of what was seen in that peak year.”

The FPSO leasing sector has seen the quickest recovery, emerging from the downturn relatively unscathed. It is forecasted to be back at 100% by 2020, said the report.

The pressure pumping industry in North America is only likely to reach 100% of its previous peak in 2023, it said.

The offshore drillers and seismic contractors are not expected to see full recovery until 2027, it added.

“As for the offshore market, we expect recovery to be slower than for onshore and North American services. The offshore market bottomed out in 2018, and it will take some time to turn around fully, as capital investments are ramping up slowly and some cost efficiencies have yet to be realized,” Martinsen said.

“Offshore drillers and seismic contractors are the last segments expected to return to their former glory, as recovery is slowed by a multiple factors – a supply overhang, higher drilling efficiency, low utilization and scant interest in exploration,” Martinsen remarked.