Neptune Energy Norge AS has hired the newly built Beacon Atlantic semi-submersible drilling rig for up to 16 wells offshore Norway.

The oil and gas producer said in a press release that it has chartered the rig from China’s rig builder CIMC Raffles, and the rig will be managed by the Norwegian offshore drilling specialist Odfjell Drilling.

The commencement of the drilling operations is expected to be in Q4 2019 and the estimated duration of the firm program is 400 days. CIMC Raffles and Odfjell Drilling are further establishing a project team at the shipyard to prepare and mobilize for the operations in the North Sea.

Beacon Atlantic is of GM4D design and is currently at CIMC Raffles yard in Yantai, China completing final commissioning and sea trials. The drilling unit is capable of harsh environment operation and is winterized for operation in Arctic areas. The unit is further designed for efficient operations with offline capability and active heave compensation system.

“The agreement is important step in Odfjell Drilling’s long term strategy as we now are securing an attractive rig capacity for harsh environment operations combined with a purchase option. Beacon Atlantic will be a valuable addition to our fleet and the award from Neptune Energy demonstrates that the rig, combined with our unique harsh environment expertise, has excellent capabilities for operations in the North Sea. CIMC Raffles and Odfjell Drilling have by this created a strong partnership and we look forward to the continuation, says CEO Simen Lieungh of Odfjell Drilling”. 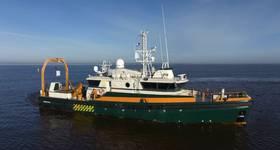