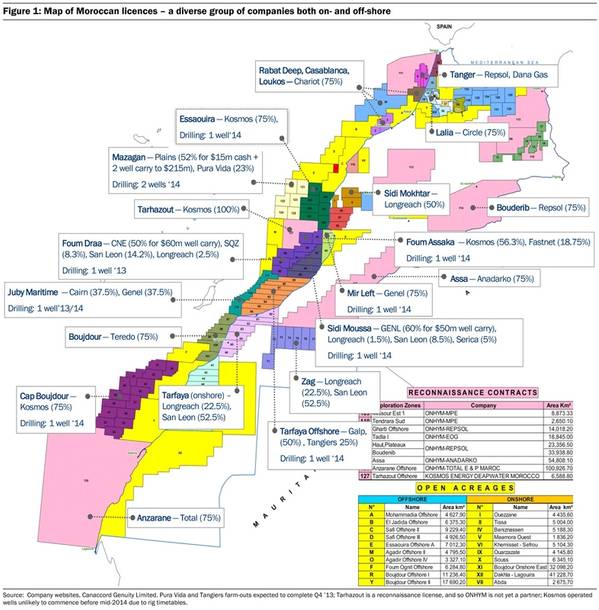 The signing of an acquisition agreement between Italian oil giant Eni and Qatar Petroleum for an offshore asset in Morocco this week has not only reinforced the business partnership of these two oil exploration and production companies but could also contribute greatly to the North African country's drive to scale up its hydrocarbon exploratory operations.

The acquisition 30% participating interest in Tarfaya Offshore Shallow Petroleum Agreement, which has a series of 12 oil blocks, by Qatar Petroleum from Eni comes at a time when the State-owned Office National des Hydrocarbures et des Mines (ONHYM) says Morocco has reported “extremely low number of hydrocarbon exploratory wells in most basins.”

Although Morocco has reported acquisition of 46,827 sq km of 3D seismic and 158,825 sq km of 2D seismic offshore data in the recent past with nearly 43 wells drilled, ONHYM says “many of the wells did not reach their objectives due to technical problems or were spudded off structure.” The North African country, ONHYM adds, has “very limited number of tested exploration concepts.”

Morocco, which last month held a successful second Oil and Gas Summit with more than 200 participants, is most likely to approve the Eni and Qatar Petroleum acquisition deal as the country woos more exploration and production companies to invest in the Atlantic margin and the Atlantic offshore.

Both Eni and Qatar Petroleum could undoubtedly benefit from Morocco's new geosientific and technical advances, which ONHYM says continues to boost the “the attractiveness of Morocco” as they await the approval of new agreement and prepare to firm up their work program in the Tarfaya Offshore shallow exploration permits.

For Eni, the deal with Qatar Petroleum is the second major one since 2016 when the Italian oil company entered the under explored upstream Morocco space when it signed a deal with Chariot Oil & Gas for acquisition of 40% stake to enter Rabat Deep offshore exploration permit.

Eni, which is pursuing a strategy of “diversifying exploration portfolio in basins with high hydrocarbon potential”, had in 2017 signed a petroleum agreement with ONHYM to enter Tarfaya Offshore shallow exploration permit, which is located in the southern part of the Moroccan offshore shallow waters in water depth up to 1,000 meters and covers a total area of approximately 23,900 km2.

The Italian supermajor, which operates in Morocco through its subsidiary Eni Maroc, holds 75% participating interest in the permit while ONHYM controls the remaining 25% with Eni saying both companies are currently performing geological and geophysical studies as part of the first exploration period work program under the Tarfaya Petroleum Agreement.

Under the new deal, the partnership structure will see Eni's participating interested drop to 45% while Qatar Petroleum and ONHYM will hold 30% and 25% respectively.

Qatar Petroleum, which recently signed yet another agreement with Eni for acquisition of a 25.5% participating interest in Block A5-A, offshore Mozambique, said the Moroccan deal “represents another important milestone in our partnership roadmap with Eni.”

“We hope that the exploration efforts are successful and we look forward to collaborating with our partners Eni and ONHYM,” said Saad Sherida Al-Kaabi, Qatar's Minister of State Energy Affairs and President and CEO of Qatar Petroleum.

“This opportunity is in line with Qatar Petroleum's strategy to enter into exploration activities in frontier basins with high hydrocarbon resources potentials as we intensify our efforts to expand our portfolio at home and abroad,” he said.

Qatar Petroleum, which has also partnered with Eni Oman and Mexico, said the first phase of exploration in the Tarfaya permit is expected to end next year with several activities lined up such as “conducting geological and geophysical studies to define potential leads and assessing the full potential of the blocks.”

Qatar Petroleum joins 12 other companies, a mixture of majors, super independents, independents, that were by December 2018 engaged in hydrocarbon exploration in Morocco's offshore and onshore plays.

For several months ONHYM has organized several at home and abroad to pitch what it says is Morocco's huge hydrocarbon resources that are yet to be fully exploited. The company lists some if its action plan to include mobilization of technical and financial resources to attract a wide range of oil partners to explore Morocco's basins.