Litigation continues in US courts over the Obama administration’s Gulf of Mexico deepwater drilling moratorium, despite the early lifting of the six-month drilling ban in October. In a 19 October decision, US District Court judge Martin Feldman – the same judge who in June struck down the initial drilling ban in a suit filed by Hornbeck Offshore Services – ruled in favor of Ensco Offshore, which had challenged the Bureau of Ocean Energy Management’s notice to lessees (NTL 05) implementing new safety requirements and the administration’s follow-up moratorium, issued as a 22-page decision memorandum.

Ensco, claiming that the moratorium had caused direct harm to its business and employees, filed suit 9 July challenging NTL 05 and the second moratorium partly on the grounds that US Interior secretary Ken Salazar had implemented the rules without first allowing a public comment period. Feldman agreed with Ensco’s argument that NTL 05 was a ‘substantive’ rule and not an interpretive rule, as the government had maintained, and was thus subject to the public notice and comment period requirements set forth in the Administrative Procedure Act.

‘Essentially, the decision invalidates NTL 05 due to the lack of notice and availability for public comment before its issuance,’ National Ocean Industries Association director of government relations Jeff Vorberger said in a letter to members after the decision. ‘As NTL 05 has effectively been implemented as an Interim Final Rule on Drilling Safety, NOIA will continue to monitor the decision’s practical impact during the Interim Final Rule’s public comment period that concludes on 13 December and on which NOIA will be commenting.’

The government filed a motion to have Ensco’s challenge to the second moratorium rendered moot after the early lifting of the ban. Feldman denied the motion and was scheduled to rule on the matter at a separate hearing 3 November. RM 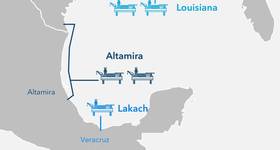