Calmer weather has allowed a recovery team to board Shell’s Arctic-class drillship, The Kulluk, which ran aground on 31 December 2012.

During tow from Alaska to Seattle, The Kulluk grounded on the southeast shoreline of Sitkalidak Island, Alaska, at approximately 9 p.m.

Incident Commander Sean Churchfield, an operations manager for Shell Alaska, said at a 3 January 2013 press conference that The Kulluk remains upright and stable, though it sustained wave damage to the topsides. Churchfield said recovery team discovered a number of water-tight hatches had been breached. Emergency and service generators were also damaged.

Shell said that there are no signs of leakage from either the low-sulfur diesel fuel or hydraulic fluid stored in tanks onboard The Kulluk. Churchfield said that flyovers will be conducted to monitor and assess the drillship and that oil spill response equipment will be continued to be deployed.

Federal On-Scene Coordinator Capt. Paul Mehler, of the U.S. Coast Guard, said that investigators from the Coast Guard’s Center of Excellence in New Orleans are enroute to The Kulluk. 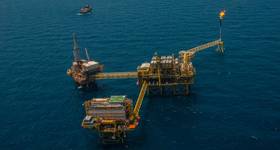 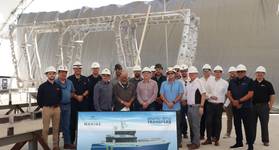