Petrobras announced that in February 2013 total production of oil and natural gas in Brazil reached 2,316 thousand boe/d. Including the share operated by the company for its partners, total volume produced was 2,414 thousand boe/d, This volume corresponds to a 2.5% drop from December, indicating a 1.7% decrease compared to January.

Total volume produced by Petrobras in Brazil, plus the company's production overseas, averaged 2,557 thousand boe/d, which represents a 2.1% drop from the previous month.

In February, Petrobras' exclusive oil production (oil plus Natural Gas Liquids - NGL) in Brazil was 1,920 thousand b/d, result 2.3% lower than January. Including the share operated by the company for its partners in Brazil, this volume reaches 1,974 thousand bpd.

The drop in produced volume was primarily due to scheduled shutdowns on platforms of Campos Basin - P-37 (Marlim), P-53 (Marlim Leste) and P-54 (Roncador), besides maintaining the scheduled shutdown of P-33 (Marlim), initiated in January, whose greatest impact on production was felt in February.

Total production overseas was 241,863 boe/d, corresponding to a 0.6% reduction from January. Of this total, 149,078 barrels of oil per day were produced, remaining production practically stable, with a 0.1% decrease compared to the previous month.
International natural gas production reached 15,764,000 cubic meters/day, which is 1.4% lower than the volume produced in January. The fall in production was due to lower demand for Bolivian gas.

Information to the Brazilian National Agency for Oil, Natural Gas and Biofuels (ANP) 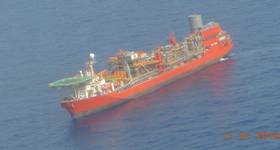