Qatar Petroleum International (QPI) and Total hwill sign a framework of agreement whereby QPI will participate in Total E&P Congo through its subscription to a 15% share capital increase of this company. This participation reinforces Qatar’s commitment to invest in Africa and illustrates Congo’s willingness to welcome Qatar as a new partner. Furthermore, QPI will contribute to the company’s significant investment programme in Congo, specifically the Moho North project.

Dr. Mohammed Bin Saleh Al Sada, minister of energy and industry and chairman of QPI, stated that this agreement is a further milestone in the implementation of QPI’s strategy to develop actively its presence abroad and especially in Africa.  He also welcomed the opportunity to reinforce relationships between Qatar and Congo and support Total E&P Congo in its development program.

Christophe de Margerie, Chairman and CEO of Total, expressed his satisfaction with this agreement which is a new step in the implementation of the MOU for a strategic cooperation in Africa entered between QPI and Total on 25 March 2010. It will further build-on the well-established partnership with QPI and will strengthen Total’s commitment to proceed with the development of the Congolese Petroleum Industry.

QPI, as part of Qatar’s global diversification, expansion, and investment, and through its strategic partnership and ventures with major energy players worldwide, is an international energy investor.

QPI has built a reputation in upstream, downstream petrochemicals and gas & power by exploring, discovering and capitalizing on investment opportunities and acquisitions. QPI’s multibillion portfolio of investments are global in scope, including partnerships and joint venture initiatives in Africa, North America (The United States and Canada), Singapore, the United Kingdom, Italy and Vietnam. 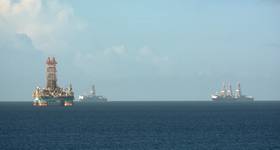