The Ministry of National Infrastructure, Energy and Water of the State of Israel's Petroleum Commissioner informed Modiin Energy that its Gabriella and Yam Hadera offshore licenses have expired due to the company's failure to achieve program milestones.

Modiin Energy said that exploration drilling was slated to start 31 August for both licenses.

“The joint venture partners are evaluating the options available to them, including the filing of an appeal of the Ministry’s decisions not to extend the licenses,”  Canadian partner Brownstone said in a statement.

The Adira Energy-operated Gabriella license, located 10km offshore between Netanya and Ashdod in the Mediterranean Sea, has already received one extension since its July 2009 issuance upon news of financial snares between Adira and Modiin. In February 2013, the Gabriella-1 well operations were suspended.

“The failure of the 70% party Modiin Energy to fund its obligations under the joint operating agreement was given as the reason for the suspension,” Brownstone said at the time.

The ministry gave the co-venturers an extension until 1 September 2014.

Partner Brownstone Energy said in a statement that no further extension was granted. Article three, section 18(a) of Israel’s Petroleum Law states that “the original term of a license is three years.” Section 18(b)(1) says that, among other stipulations, if no discovery has been made in the licensed area, “the Commissioner may extend the term of the license if it appears to him that there is good and satisfactory cause for doing so.” Including extensions, the total term shall not exceed seven years.

Under law, terms for extension differ if discoveries have been made on the license.

Modiin Energy was the sole owner and operator of the Yam Hadera license, 30km off Israel and northwest of Gabriela. In the Gabriella license, operator Adira Energy held 15%; with Modiin Energy holding 70%; and Brownstone Energy (15%) rounding out the partnership.

A representative of Modiin Energy did not respond to requests for comment at the time of this writing.

Image of licenses from Modiin Energy 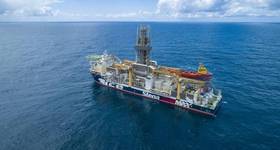