Eni's Australian subsidiary decided to shed its stake in the Heron area off Northern Australia after opting out of plans to drill a second well inside permit area NT/P68.

The Italian explorer also elected to hold its current 50% share in the Blackwood area, also within permit NT/P68, without exercising the option to increase its stake by 25%. License partner MEO Australia will reclaim its status as the sole interest-holder on Heron and remain Eni's partner on Blackwood.

Eni acquired its operatorship and participation in the Heron and Blackwood gas discoveries, located in permit NT/P68 in the Timor Sea, on 17 May 2011. Eni agreed to cover the drilling costs of two wells to earn 50% participation in Heron. Eni also agreed to a 60-day timeframe upon completion of the first well  to decide to drill a second or withdraw from the permit.

Under the agreement for the Blackwood area, Eni could earn its 50% participation through acquiring a minimum of 500sq km of 3D seismic and drilling one well.

An option to pick up an additional 25% interest could be earned through funding the work program required to reach a final investment decision in Heron or Blackwood, individually or jointly.

The ENSCO 109 jackup completed drilling operations on the Heron South-1 well, opting to plug and abandon the well on 14 December 2012. Drill stem tests flowed gas with CO2 composition of 25% to surface from the Frigate formation in the Elang Plover reservoir. However, low flow rates were observed during the two production tests Eni carried out, which MEO Australia said in a 6 December statement indicated low primary reservoir permeability due to natural fractures despite the presence of gas in place.

The Blackwood-2 appraisal well was spudded with the ENSCO 104 jackup on 28 October 2013. It was plugged and abandoned on 3 January, 2014. MEO Australia said in a 13 December 2013 progress update that gas testing and reservoir productivity could not be conclusively established.

The Italian giant weighed its decision since the two completions, with MEO Australia granting multiple deadline extensions. Most recently, the Australian company extended Eni’s deadline to make a decision on Heron this summer from 29 August to 28 October.

MEO Australia said in a statement that the two partners will need to negotiate certain aspects of the Blackwood agreements to define future activities in the area. 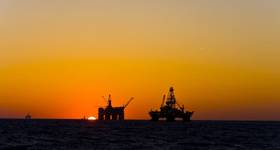