New York-headquartered Hess says it is cutting its 2015 capital and exploration budget by 16%, compared to 2014, to US$4.7 billion.

While the firm said most of the cash (45%/$2.1 billion) would be spent on its unconventional shale resources, deepwater would remain a focus.

Image: The Tubular Bells development in the Gulf of Mexico. Photo from Hess Corp.

Some $250 million will be spent completing drilling one production well and one water injection well, and for continued facilities work at Tubular Bells (Hess 57.1% and operator) in the US Gulf of Mexico.

$200 million drilling production, appraisal and water injection wells at the Shenzi field (Hess 28%, BHP operator), in the Gulf of Mexico.

Some $175 million will be spent drilling 8-10 wells and progressing the ongoing booster compression project in the Joint Development Area (Hess 50%) in the Gulf of Thailand.

Some $300 million will be spent progressing the hull and topsides fabrication and the start of drilling at the Stampede field (Hess 25% and operator) in the deepwater Gulf of Mexico. 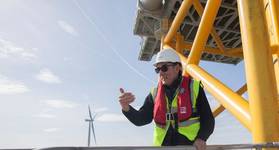