A new lease on life

Scrap or refurbish and reuse? It’s a question being asked on the UK Continental Shelf. Elaine Maslin reports.

At a recent conference in Aberdeen, a speaker made the comment that, after a long delay, decommissioning was coming “hard and fast” to the UK North Sea.

A step change is on its way, in the form of the single lift platform removal vessel the Pioneering Spirit (OE: April 2016). Yet, platform removal is not the only job involved in the decommissioning process. Processing all the structural material and equipment on a platform will also provide a massive amount of work.

To date, the industry has done a good job of recycling these materials. Currently, up to 98% by weight of materials from decommissioned platforms are recycled back into raw material at the end of their life, according to industry data.

But, recovery and reuse of components seems to be lower on the agenda, despite an established market in oilfield pipes and other drilling-related equipment. According to a report by the Royal Society for the Encouragement of Arts, Manufactures and Commerce, called The RSA Great Recovery & Zero Waste Scotland Programme, into North Sea Oil and Gas Rig Decommissioning & Reuse Opportunity, this approach would offer “significantly higher” inherent value than recycling.

The concept has been badged the “circular economy,” where old products parts and materials are restored to be reused, resulting in lower use of resources.

But, reusing components or equipment might not be that easy. While drill pipe is, to a higher degree, fairly standardized, thus more suited for reuse, other oilfield equipment is not, and scrapping offers the more convenient route. A “shift in mind-set” is required, according to another report involving Zero Waste Scotland, ABB and Decom North Sea. But, players who are able to “connect the dots” between available inventory and potential buyers – outside and inside the industry – are also needed.

There are barriers to reuse. To a certain degree it’s simply uncertainty. To date, the decommissioning market in the UK North Sea has been few and far between, which has meant there’s little scope to create a market.

There are also concerns about risks associated with using reconditioned materials, which may have been operating in extreme conditions, according to the RSA report. There is also a fear the equipment could be less reliable than a new item, so any cost saving would be lost in reduced efficiency or downtime and maintenance costs, says the Zero Waste Scotland report.

Using existing equipment might mean having to make compromises with a system design, and in certain areas (e.g. combustion equipment, pressure vessels, etc.) modern regulatory requirements may not be met by older equipment, resulting in reengineering requirements. Or the equipment may simply not offer the same functionality or effectiveness as modern equivalents, particularly when it comes to control systems, but also other items such a process equipment. This, and regulations, means older equipment is much more likely to be used on older facilities to extend life, says Dorian Hindmarsh, of UK-based Proeon Systems.

A further concern is liability. “Operators have been reluctant to release equipment on to the resale market. One reason for this was highlighted as a concern that some residual risk will remain with the resold or reused equipment,” says the Zero Waste Scotland report. Operator’s duty of care to trace all wastes returned to shore also adds a degree of uncertainty – at what point does their duty of care end?

Then, of course, there is the pre-disposition to engineer anew and buy new products, with bespoke designs to specific conditions, says the RSA report.

Some of the issues are around the difficulties in obtaining warranties and assurances, poor data management or knowledge about products being recovered, and even simply insufficient capacity to handle and process decommissioned facilities and lack of integration across the supply chain, says the RSA report. In other words, there’s not yet a market for this stuff.

Other industries (including safety critical industries such as aerospace) have a significant reuse sector, particularly for spare parts, says Zero Waste Scotland, and they actively manage their old equipment with reuse in mind.

Indeed, within the upstream industry, there is an active market in reuse and resale of turbines, pumps and compressors, as well as pipe, with organizations already working in this area, such as Salvex and OilMac and Quipbase in Norway. OilMac lists connectors, winches, valves, BOP rams, cranes, spools and even new, unused lifeboats and production jumpers, presumably ordered and then cancelled. Quipbase has sold BOPs out of the North Sea to Mexico and a pedestal crane to a pipelay barge based in Sakhalin. It currently listed an unused 120-man offshore accommodation module. Salvex has similar inventory, as well as drill pipe, including even pedestal cranes from a North Sea platform, which may one day find another home. Concrete mattress reuse is also being looked at under a separate study.

While the Zero Waste Scotland study suggested just 9.9% of a northern North Sea platform could be reused, this is still nearly 10% of the facility that could return more value than it otherwise does.

An industry workshop by RSA identified 186 reuse propositions. The six considered to have the most potential for component and equipment reconditioning and reuse were:

The Zero Waste Scotland report listed items identified by reuse specialists that could be reused:

But, finding buyers for these items is the key. “With the scale of what is happening in the North Sea, you need a wider market than what Aberdeen can support,” says Ben Williams, a surplus asset broker, Salvex. In fact, it’s easier to sell some of the equipment outside the oil industry, sometimes simply because of the procurement processes, although some flexibility is starting to come in here under the current oil price, but also due to having to meet specific design criteria. “For a new $100 million, or $1 billion project they are not going to cut corners on a generator,” he says. “There are a lot of opportunities for resale in other markets. It is just shifting the point of view, and finding an industry where it could have value.

“That is what Salvex does,” Williams says. “We have stable markets like pipe. But, other items we have access to wider markets. It’s just a case of joining the dots. We have interest from people from all over the world looking at items from different angles.”

The RSA report agrees, saying the greatest potential for reuse would likely be into other industries. Zero Waste Scotland also points to demand for redundant power and process plants in markets in emerging economies such as India, China, Brazil and Africa. “Most equipment has a resale value, the challenge is to give long enough lead times in order to market and find the person or company who wants to buy,” it says.

However, equipment for reuse also needs to have been identified early in the field’s late life to make sure it’s suitable for reuse and marketed as such. Removing it early in the decommissioning process would also help preserve it and clear space on the facility, the Zero Waste Scotland report points out.

And, it’s still hard to resell equipment designed specifically for the oil and gas industry, where reuse opportunities in other industries is hard to find.

There have been examples of entire platform reuse from the UK Continental Shelf. Perenco reused the Welland platform topsides on a new mobile offshore platform off Congo after it was decommissioned from the southern North Sea.

Statoil recently reached agreement with ConocoPhillips to reuse the complete topsides of the Huldra platform on a new development (subject to project approvals), according to the ABB Decom North Sea report.

Both of these platforms are relatively small (topsides weight; Welland, 1000-tonne, Huldra, ~5000-tonne; both unmanned installations). In the case of the Welland, significant reengineering and refurbishment was required, due to the time between cessation of production and removal, according to the report. However, this demonstrates that the concept of reuse at a platform level is economically viable, the report adds.

The Nenè platform, installed offshore Congo, West Africa by Eni, was a reused facility, too. It had previously been used for 10 years in the Gulf of Mexico. For Italian verification firm RINA, the key to full platform reuse is structural analysis, to make sure a facility will meet new site conditions to ensure in service life would meet acceptable safety levels.

In a decommissioning and reuse study for the Maureen steel gravity-based platform, Arup suggested the facility could be reused as piers for a bridge over deep water in Scotland, or converted into a heavy lift crane, or cut up and used in construction of new port structures. The platform was ultimately reused as the basis of a new quay at Aker Stord’s facility in Norway.

According to a report by business consultancy PWC, platform jackets could be reused for offshore wind farm substations, LNG terminals or platforms for wind or solar generation. They could even be used for military use, fish farms, research centers, or, perhaps a little controversially, offshore high-security prisons. Topsides, it says, could be reused as temporary offices or accommodation onshore, or, left in situ, as an emergency training center.

PWC points out that platforms have already been reused as artificial biotic reefs in the US, Brunei, and Malaysia. Indeed, one jackup facility has been used as a hotel-recreational diving facility, and another as a restaurant, on the edge of Rotterdam. Again, where operator liability ends would need to be clearly set out.

According to the Zero Waste Scotland report, the offshore industry is starting to realize the benefit of aligning an asset’s obsolescence strategy with the company’s decommissioning strategy, which would help pave the way for equipment, which has been maintained, to be reused.

“Platform decommissioning, if managed in line with obsolescence work, can present an opportunity to identify and retain key critical spares for both internal use or for resale to other operators or industries,” the report says.

“However, it requires a mindset change; decommissioning strategies should, ideally, be in place before carrying out asset life extension and in parallel obsolescence studies.”

With little by way of legislation to encourage reuse, the focus on removal in the most convenient way, while meeting HSE could still prevail.

*According to Decom North Sea, UK Oil & Gas and estimates given at the 2015 SPE Well Abandonment Seminar in Aberdeen.

According to a report by DecomWorld, the US Gulf of Mexico resale market is facing a different challenge. The market for refurbishment and reuse has dried up due to too many rigs coming offline.

Historically, used equipment such as compressors, generators, cranes and sometimes pressure vessels has been very marketable, it says. But, there have been so many more platforms removed versus installed since 2005 that the used equipment market tends to stay flooded. 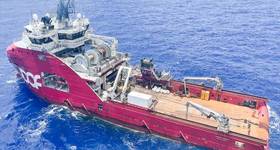