Undeveloped pools in the North Sea and elsewhere could make it over the line with TechnipFMC’s iEPCI approach to subsea tiebacks. Elaine Maslin reports.

Moving away from a bespoke approach to oilfield development has been seen as one of the ways the industry could reduce costs following the downturn’s start in late 2014.

TechnipFMC has been applying such thinking to subsea tiebacks on the Norwegian Continental Shelf (NCS).

“There are a lot of undeveloped fields in the North Sea that are not economical with traditional solutions,” said Dag Jostein Klever, global technical manager iEPCI Satellite Systems, TechnipFMC, at the Underwater Technology Conference (UTC) in Bergen, Norway. “According to analysis, there are approximately 180 undeveloped fields on the [NCS]; 54 of those are less than 20km from host facilities and have up to 30 MMboe. None are high-pressure, high-temperature.”

TechnipFMC has developed a system to tap a “sweet spot” among these fields. This would be projects with up to three well satellites, at less than 20km stepout, and water deeper than 125m, where fields are non-high-pressure, high-temperature, and contain more than >30mmbbl in-place.

The system is part of TechnipFMC’s iEPCI (integrated EPCI) concept, which has been developed through a design to cost approach, where the total cost of a project – including installation, operations cost, and abandonment cost – is analyzed and the appropriate building blocks are selected. Subsea umbilicals, risers and flowlines (SURF) and subsea production system (SPS) building blocks are vendor-based specification and pre-engineered solutions. The installation ethos is such that a solution can be installed and ready to produce through one single vessel campaign, without disturbing the drilling rig.

Such a solution would be a mid-point between fields accessible by deviated drilling or standalone projects, Klever says. By also looking at possible reuse of the equipment, for fields with 3-7 years’ drainage life, the proposition could be even more beneficial – although this would mean a change is necessary to maintenance philosophies to enable reliable, predictable reusable equipment, Klever says.

“We have focused on optimizing the solution for installation,” Klever says. “Pre-engineered solutions and installations plans reduces delivery time.”

As a basis for design, for a 5km, 500m water depth project, a low footprint over-trawlable structure would be used, and could be installed in one campaign (along with the Xmas tree and subsea umbilicals and trenched flowlines) from one vessel, with rental tooling on board. It would use a conventional, 5in, 10,000psi configurable vertical Xmas tree, with a basic circular retrievable choke, with functionality to be added for specific applications.

It would have an electro-hydraulic system controlled via a 5km steel tube umbilical and a 6in flexible control line, with a UCON H8 connector integrated into the design. For hydrate formation prevention, continuous injection of inhibitors would be required, so the umbilical is designed for a rate of 1500cu m/hr injection. “That, with decompression (for long-lasting shutdowns), is the basic philosophy for the design,” Klever says.

To reduce rig scope, Xmas tree installation would be from a vessel on a wire, using a work class ROV for communications and pressure testing, and then well opening by manipulating the pump open well barriers. This could typically remove seven rig days and add three vessel days, Klever says.

Such an approach would reduce project execution from 41 months for a traditional approach (SPS 24 months, SURF delivery 30 months), to 20 months with the iEPCI approach (SPS plus SURF).

“We see the potential to reduce cost by more than 30% compared to the industry standards for satellite solution,” Klever says. “We are now working with clients how to reduce costs further.”

In a parallel study, opportunities in Asia Pacific were considered, including a three-well tieback with a leased FPSO. “We are now looking at all regions, looking what the key drivers and similarities are globally,” Klever says. “That would allow us to use solutions across the regions.” 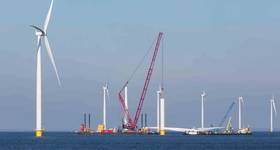