Typically, a vessel with dynamic positioning uses two or more engines simultaneously to secure back-up power. This means that the engines’ load run low. By using a hybrid/battery system to provide the needed back-up power, the operational engine can be used closer to its optimal load.

“In addition, with a more efficient vessel, we will save fuel expenses. The estimated reduction in emissions is 5.5 million kg CO2, 30 tons of NOx and 1,200 kg SOx per year. After Wärtsilä had retrofitted our ship Atlantic Guardian in 2014, we really understood how much fuel can be saved by improving the vessel’s efficiency. Efficiency also saves time, because you only need to refuel every second or third port visit,” says CEO Hallvard Klepsvik, North Sea Shipping.

Wärtsilä says that installation of an energy storage solution into a class DP3 vessel has never been carried out before and requires a redefinition of applicable classification rules. Therefore Wärtsilä and North Sea Shipping are working in close collaboration with the DNV-GL classification society.

“We are the first in the world to work with hybrid systems on bigger vessels such as the DP3 classified North Sea Giant, and the project will set a new standard for this type of vessels,” says Cato Esperø, Director Sales Norway, Wärtsilä.

Earlier this month, Australia's Woodside Energy said it was setting out to achieve a world first by installing a microgrid with a 1MW lithium-ion PowerStore Battery energy storage system on an offshore platform.

Working with power and automation group ABB, the solution will be installed on Woodside's Goodwyn A platform, on Australia's Northwest Shelf, in 2H 2018, marking the first offshore application of such technology in the world. 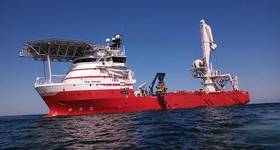