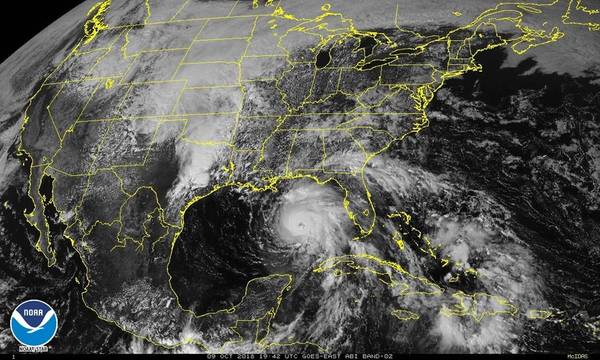 Nearly 40 percent of daily crude oil production was lost from offshore U.S. Gulf of Mexico wells on Tuesday due to platform evacuations and shut-ins ahead of Hurricane Michael.

Since Monday, oil producers, including Anadarko Petroleum Corp, BHP Billiton, BP and Chevron Corp , have evacuated personnel from 75 platforms as the storm made its way through the central Gulf on the way to landfall on Wednesday on the Florida Panhandle.

Companies turned off daily production of about 670,800 barrels of oil and 726 million cubic feet of natural gas by midday on Tuesday, according to offshore regulator the Bureau of Safety and Environmental Enforcement (BSEE).

The evacuations affected about 11 percent of the occupied platforms in the Gulf, it said.

U.S. crude futures settled up less than 1 percent at $74.96 per barrel, reflecting the declining importance of the Gulf of Mexico in output because of the growth of production from the nation's onshore shale fields.

Crude output lost in the two days of storm shut-ins represents about 9 percent of the U.S. production of 11.1 million barrels per day, according to data from the Energy Information Administration.

In addition to shutting in wells, oil producers also halted most offshore drilling operations by evacuating three drilling rigs and moving eight others out of the storm area, BSEE said.

Coastal and onshore energy businesses also started preparations for what is expected to become a Category 3 storm packing winds of at least 111 miles per hour (178 km per hour).

Nuclear Regulatory Commission inspectors at Southern Co's Farley Plant near Dothan, Alabama, about 100 miles (160 km) from the coast, were observing final storm preparations at the 1,751 megawatt (MW) nuclear power station on Tuesday, NRC spokesman Joey Ledford said in an email. One megawatt can power about 1,000 U.S. homes on average.

The U.S. Coast Guard on Tuesday closed the ports of Panama City and Pensacola, Florida, and the Gulf Intracoastal Waterway east of Perdido Pass to vessel traffic, citing expectations for gale force winds within 12 hours.

Other ports further west were still operating normally. However, operations including rail car loadings will cease at 5 p.m. at the State of Alabama's Mobile port, spokeswoman Sheri Collins said. Pilots who bring vessels into the port's ship channel halted transport due to rough seas and will resume after the storm passes, she said.