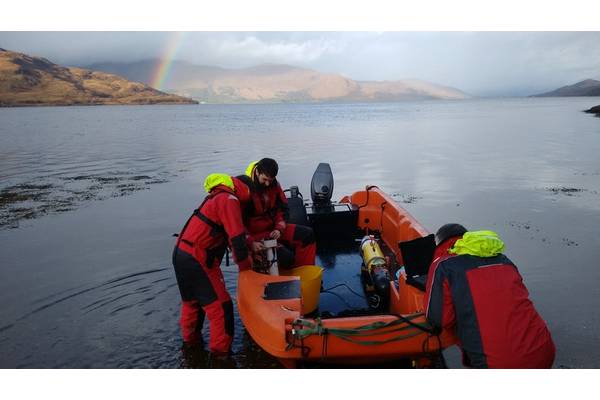 A Remus AUV being deployed in the Corran Narrows. Photo from MarynSol. 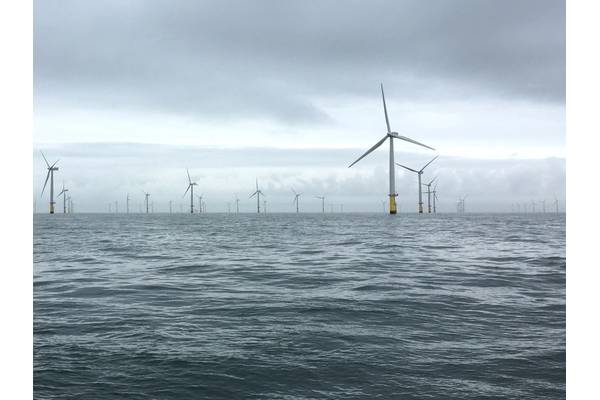 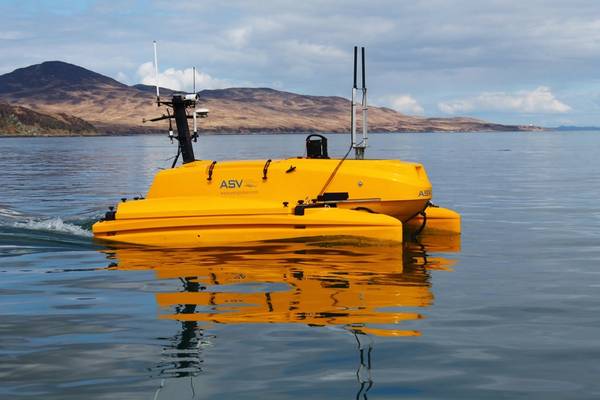 A C-Cat 3, from ASV Global, being used for ADCP work in the Sound of Islay. Photo from MarynSol. 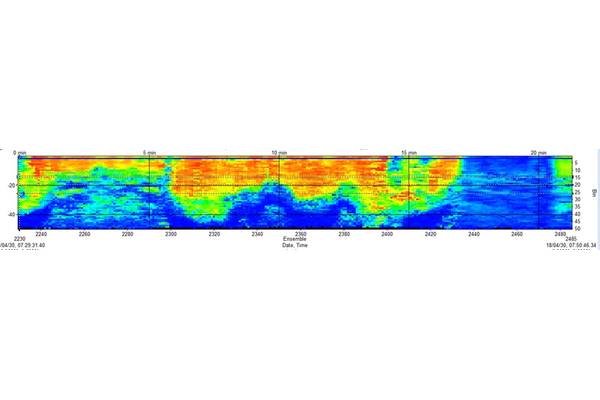 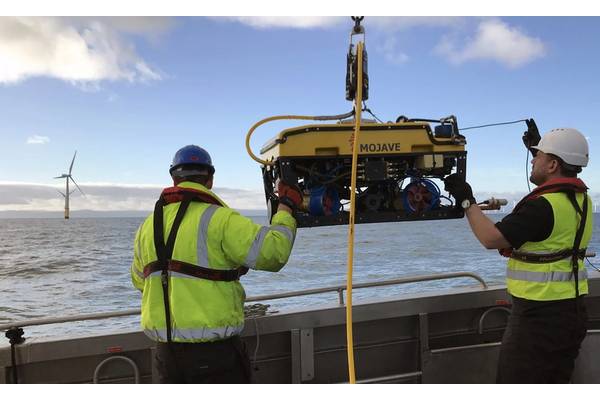 Rovco launches an ROV on a windfarm survey. Photo from Rovco.

As the global fleet of offshore renewables fleet increases, ways to reduce the cost and increase the efficiency and safety of operations and maintenance work, using robotics and autonomous systems, will also grow. Elaine Maslin reports.

Robotics and autonomous systems are moving into many areas of modern day life. It’s becoming harder to avoid them, from our phones to automotive systems and now offshore energy renewable projects.
Both are seen as tools to do otherwise dull, dirty or dangerous work, without human involvement, but also as a way to reduce operational cost and to produce more reliable repeatable data.
Marine renewables is seen as a space ripe for innovation in this area, especially around operations and maintenance (O&M), which is a largely human intensive activity, limited by access issues, above and beneath the waves.
HOME Offshore (Holistic Operation and Maintenance for Energy from Offshore Wind Farms), a consortium of universities working on remote and autonomous inspection technologies for subsea cable inspection, says 80- 90% of the cost of offshore O&M is generated by access requirements and that routine subsea inspections can be slow and costly and often include manual visual inspection with large margins of error.
Some inspection needs weren’t anticipated, including grouted joint issues, which effect some 35-40% of installed monopile foundations (mostly pre-2012 installed structures), caused by the harsh marine environment, according to the Offshore Wind Accelerator (OWA), a Carbon Trust project supported by nine offshore wind developers. Many of the structures built after 2012 will also need performance monitoring while new designs such as jackets, which are constructed using welded nodes, will also present inspection challenges, says the OWA.
In addition, currently 70% of subsea power cable failure modes cannot be monitored in-situ, inhibiting accurate health monitoring, says the HOME Offshore group. “By integrating technologies, such as autonomous underwater vehicles and advanced sonar technology, we will gain a new insight into the condition of these subsea assets,” says Dr David Flynn, director of the Smart Systems Group at Heriot-Watt University, and a member of the HOME Offshore group.
There’s going to be a large market to address. Some 3.1 GW of new offshore wind capacity was installed in Europe in 2017, double the capacity installed in 2016, according to WindEurope, a trade body. By 2020, WindEurope expects a total European offshore wind capacity of 25GW – with all the associated infrastructure that comes with it.
HOME Offshore estimates that use of remote inspection and asset management of offshore wind farms and their connections to shore could be an industry worth up to £2 billion annually by 2025, just in the UK. The UK’s Offshore Renewable Energy (ORE) Catapult thinks that 20-40% savings could be made by using remote operations.

Surface
Unmanned surface vessels (USVs) could be part of the solution, for parts or personnel transfer, but also survey and surveillance, Simon Cheeseman, Sector Lead, Wave & Tidal Energy, at Offshore Renewable Energy (ORE) Catapult, told the All Energy conference in Glasgow in early May. “USVs could be used to run small-scale spares. It (a USV) could operate in a wider weather window, no one gets hungry, and you can put other sensors on there, for cable monitoring and security, all on a single multi-purpose platform. It could enable other stuff we have not thought of so far.”
According to ASV Global, an autonomous vessel provider, as much as 60% of offshore wind farm operating costs are related to vessels. A £900,000 Innovate UK supported, 18-month project, called the Windfarm Autonomous Ship Project (WASP), is looking at what is needed to use USVs in offshore wind farm maintenance. WASP is being led by ASV Global, in partnership with the ORE Catapult, with SeaRoc Group, Houlder and the University of Plymouth. The group will work with Ørsted (Previously Dong Energy) on use cases, relevant to the Hornsea One offshore wind farm, 140km off the coast of Yorkshire.
Some of the technical challenges for autonomous systems, both surface and subsea, include being able to navigate, obstacle avoidance, self-diagnostics and recovery and the integration of autonomous systems into manned maritime co-ordinated systems, says Cheeseman. There are also concerns, around data security and hacking, which could cause damage to a transformer or sub-station, and also societal concerns, around autonomous systems.
However, USVs and AUVs are already being used in offshore renewables as part of survey operations. Edinburgh-based MarynSol has been using USVs to do rapid surveys of tidal systems, to aid in feasibility studies and array design for tidal energy sites.
The firm’s director, Dr Jonathan Evans, told All Energy that using a USV, such as ASV Global’s C-Cat, or an autonomous underwater vehicles (AUV), like a Remus, with a sensor package and MarynSol’s SeaSmart software, can mean rapid mobile observations and automated processing and reporting.
“The use of robotic marine vehicles as the survey platform reduces the limitations caused by costs, risks and physical endurance of the crew,” he says. “Automating the data processing reduces the costs and error risks of manually handling/processing of the data.”
With a conventional approach, a static ADCP would be used on a vessel, requiring a crew, usually at a single location (or two or three if you are very lucky), for at least one lunar month, followed by a week (or more) of post-processing reporting with no direct observations across the whole array site and you can only validate an area simulation model at single location, says Dr Evans.
Using SeaSmart and a mobile ADCP on a marine robotic vehicle (AUV or USV) means being able to cover the whole potential array site. “It can target specific tides over a short period (3-4 days),” says Evans. “It has highly automated post-processing of data to provide large area model validation and rapid results - usually within a hour or less, which facilitates additional immediate follow-up measurements.”
In late April, MarynSol used a C-Cat3 in the Sound of Islay North Channel. It ran repeated legs around the Sound, then the data was stacked and could be sliced and a video produced. It showed a lot of internal structure in the data, says Evans, “water over flowing over each other bouncing off bathymetry, 3-4m/sec in some places, with interesting shear profiles.”

Visualization
A number of projects are focusing on subsea visualisation technologies supported by subsea vehicles, to assess offshore renewables assets. An OWA project will see Kraken Robotics demonstrate its SeaVision 3D RGB Underwater Laser Imaging System on foundations. An initial system, incorporating a high-resolution camera and laser to create as built point cloud models, was designed for deployment on underwater robotic platforms such as ROVs and AUVs.
Another project, with ORE Catapult support, will see Bristol-based Rovco to use its 3D visualisation technology with subsea robotic systems to image offshore wind foundations, supported by artificial intelligence-driven software, to lower inspection costs by 80%. A system was moving to full testing and validation at the ORE Catapult’s National Renewable Energy Centre in Blyth, northeast England.
Grout
To address the issues around grout and weld faults on monopiles and jackets, the OWA is supporting a number of subsea technology developers, including Oceaneering. The US-based firm is one of two being supported to develop jacket foundation weld inspection technologies. Oceaneering has offered a tool which will attached to the jacket structure to perform a detailed scan of node welds. Kraken Robotics, meanwhile, developed laser imaging device, which can be deployed on an ROV, which could find locate defects before the more targeted Oceaneering tool is used.
As part of the same project, Uniper and Next Geosolutions are developing subsea monopile and grout inspection technologies. Working with British Geological Survey, Uniper has offered a tool to do low frequency ultrasound inspection at the wavelength of the grout thickness. Spectra reflections from the ultrasound can be interpreted to show gaps or disbandment in the grout.
Next Geosolutions, as part of a consortium with Hydrasun and Ashtead, is also developing a tool to perform subsea grout inspection using wideband sonar inspection, inspired by bottle nose dolphins. This will examine grout condition between jacket steel components. Offshore trials for all the OWA supported technologies are planned for this summer/Autumn 2018.

Subsea cables
Monitoring subsea cables may be a harder task. While most offshore windfarms have been built in shallow waters, relatively close to shore, visibility is poor and there are often strong currents. Power cables are typically buried or covered by sand, mud or silt, making survey with traditional methods challenging. Sand banks in the southern North Sea can also shift dramatically, over night.
AUVs could be a key tool in this development. ORE Catapult says offshore wind farm operators who use AUVs can reduce their levelized cost of energy (LCOE) by 0.8%. Applying this cost saving for a 400MW representative offshore wind farm, a 0.8% LCOE reduction will yield cost savings of £1.6 million a year, the organization says. Across the current 11GW of European installed capacity over this next 25 years, that could equate to as much as £1.1 billion.
One of the projects in this space is Darlington-based Modus Seabed Intervention’s resident AUV docking station project (see MTR: May 2018), which is being supported by the ORE Catapult. This is aimed at having vehicles remain in field to survey and inspect offshore wind farm subsea infrastructure, instead of having to be supported by support vessels.

New frontiers
The inspection opportunities will further open-up as new frontiers open up in the offshore renewables space, not least within floating offshore wind. While there is only one operating pilot offshore wind park today, Statoil’s Hywind park offshore Peterhead, Scotland, with five floating wind turbines, the global potential is seen as significant. With more subsea components than fixed bottom wind turbines, including hulls, mooring lines, anchors, and cabling, there’s potentially more work to be done here.
Indeed, Oceaneering International Services was recently selected as a contributor to the Carbon Trust-led Floating Wind Joint Industry Partnership (JIP) study so assess monitoring and inspection requirements for floating wind projects.
Offshore renewables is an emerging market in the O&M space. As more facilities are built, the case for using robotic and autonomous systems as part of their operations and maintenance will grow.