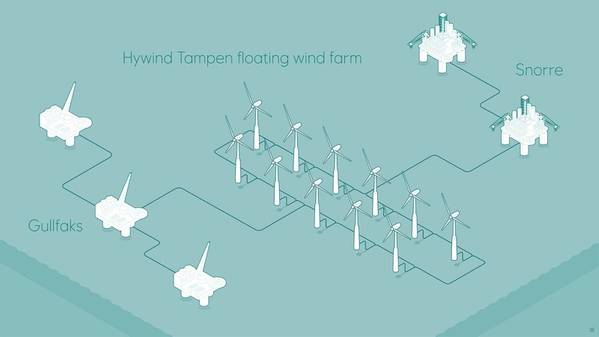 Norway's Equinor said on Tuesday it is considering whether to build a pioneering offshore wind farm with floating turbines to supply electricity to two North Sea oilfields as part of a strategy to curb greenhouse gas emissions.

The project at the Gullfaks and Snorre oilfields would cost around 5 billion Norwegian crowns ($592 million) and could reduce Norway's emissions of carbon dioxide by more than 200,000 tonnes per year, Equinor said.

"This could be the first time an offshore wind farm is directly connected to oil and gas platforms," state-controlled Equinor said in a statement. The two fields currently are powered by generators running on natural gas at the platforms.

Norway's greenhouse gas emissions have remained high despite pledges for deep cuts under international accords such as the Paris climate deal. Last year, Norway's annual emissions were 2.4 percent above 1990 levels at 52.4 million tonnes.

"To maintain profitable operations (offshore Norway) in the long term, it is essential that we do our utmost to further reduce the carbon footprint from our activities," Executive Vice President Arne Sigve Nylund said.

Formerly known as Statoil, Equinor earlier this year changed its name to underscore a push into renewable energy under Chief Executive Eldar Saetre, although oil and gas will remain the company's dominant business.

A final investment decision on the plan for Snorre and Gullfaks, known as the Hywind Tampen floating wind farm, will be made in 2019, Equinor said. The company will seek to reduce the cost from the preliminary estimate.

Equinor said it hoped Norwegian government subsidies would cover half the capital expenditure for the project, where 11 turbines, each with a capacity of eight megawatts, would meet about 35 percent of the power demand from the two fields.

Electricity generation costs could be 40-50 percent less than the 200 euros ($229) a megawatt hour at the Scottish project.

The Gullfaks field is owned by Equinor, OMV and Norway's state-owned Petoro, while Snorre is held by Equinor, Petoro, ExxonMobil, Idemitsu, DEA and Point Resources.