A "float and submerge" gravity-based foundation (GBF) has been successfully installed onto the sea bed as part of the Blyth Offshore Demonstrator wind farm.

Developer EDF Energy Renewables says it is the first time the "float and submerge" method has been used on an offshore wind farm.

EDF Energy Renewables is building the Blyth demonstrator off northeast England, with five wind turbines with a total 41.5 MW generating capacity due too be installed about 6.5km off the coast of Blyth.

The concrete and steel GBFs were constructed in the Neptune dry dock on the Tyne and floated down river to the Port of Tyne where extra ballast was added ahead of their tow out to the offshore site location using three standard tug vessels.

At the offshore site, transport firm Strukton is using a specialist vessel to pump sea water into the foundation as ballast to lower it to the prepared sea bed. Once in place, the water ballast is replaced with a sand ballast to enable the foundation to rest securely on the sea bed to provide the support structures that act as the foundations for the installation of the wind turbines.

EDF Energy Renewables CEO, Matthieu Hue said: “As well as playing an important role in the generation of low carbon electricity, the Blyth scheme is playing a fundamental role in the in the investigation and testing of new and emerging offshore wind farm installation methods and technologies. As a result, this has been a complex and highly innovative project, but to have successfully reached this latest important stage is very satisfying and work will now progress towards completion of the project in the coming months.”

Each GBF is made up of more than 1800cu m of concrete and weighs over 15,000-tonne when fully installed on the seabed. The structures are about 60m-tall, from the base to the access platform.

Once all five GBFs are in position in the coming weeks, Dutch contractor VBMS will start laying the 66kV inter array and export cables - another first - connecting the wind farm to a new substation at Blyth.

Five, 8.3 MW MHI Vestas V164 turbines will then be installed onto the GBFs. They are the largest turbines to be used on an offshore wind farm. It is anticipated that the turbines will start generating power by the end of the year. 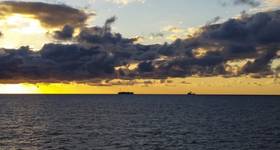 Keppel in Talks with Petrobras to Build FPSO for Buzios...