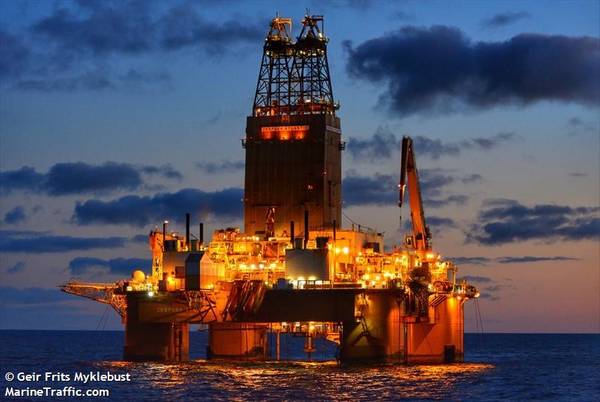 The Norwegian offshore oil and gas safety body PSA Norway has launched an investigation into a lifting incident that happened on the Deepsea Atlantic offshore drilling rig on Sunday, May 8.

"While hoisting a 32-tonne slip joint from a vessel to Deepsea Atlantic, the rig crane broke down, and its wire ran free. The joint dropped to the vessel's deck and then into the sea. The drop height still has to be ascertained. No personal injuries or damage to subsea structures or the vessel have been reported," the PSA said.

The PSA told Offshore Engineer that the vessel, on which the slip joint dropped, before falling into the sea, was the 91 meters-long Stril Mar supply ship, owned by Simon Møkster Shipping.

As for the Deepsea Atlantic, it is a dual derrick, dynamic-positioned semi-submersible drilling rig of GVA 7500 design, owned by Odfjell Drilling.

The drilling rig is on a contract with the Norwegian oil and gas giant Equinor. According to PSA, the incident occurred on the Statfjord North satellite field in the North Sea, where Equinor is the operator. Info on Odfjell Drilling's website shows that the rig is equipped with NOV KBC deck cranes with a lifting capacity of 100t and 85t.

"The PSA has decided to launch its own investigation of this incident. The main objectives are to identify the causes of the incident and possible lessons to be learnt, and to share this information with the industry," the PSA said.

In conducting its investigation, the PSA said it would clarify the course of events and the scope of the incident, assess the actual and potential consequences of the incident, assess direct and underlying causes identify nonconformities and improvement points related to the regulations, apply necessary enforcement powers to correct possible regulatory breaches, make public its findings, and contribute to experience transfer to and learning by other players in the petroleum sector.

Offshore Engineer has reached out to Equinor and Odfjell Drilling, seeking further info on the incident.

Equinor did not immediately respond.

An Odfjell spokesperson said: "We confirm the information published by the PSA, that there has been an incident during a heavy lift from the supply vessel to the rig, Deepsea Atlantic. Odfjell Drilling and Equinor are jointly investigating in parallel with the ongoing PSA investigation. Based on this process, we are not in the position to share more information beyond the information given by the PSA."

In a recently released 2021 annual report, Odfjell Drilling said that in 2021 the company saw an increasing lost time incident trend, but a decrease in the number of medical treatments and dropped objects.

Odfjell said it had experienced one "high potential incident" and one serious incident in 2021.

The serious incident occurred in January 2021 when a crane hook hit a  person during a lifting operation.

According to Odfjell drilling, the injury resulted in an LTI, but the injured person has recovered well and is back in his ordinary work. The "high potential incident" happened in November 2021 when a drill line dropped to the drill floor during a change of drill line.

No one was injured as a result of this dropped object, but the investigation group evaluated the potential consequence as high, Odfjell Drilling said in its annual report.

"The first quarter 2022 safety results show a stable trend in the number of serious incidents and with regards to personal injuries. No incidents with major accident potential have been recorded during the first quarter," the company said at the time.