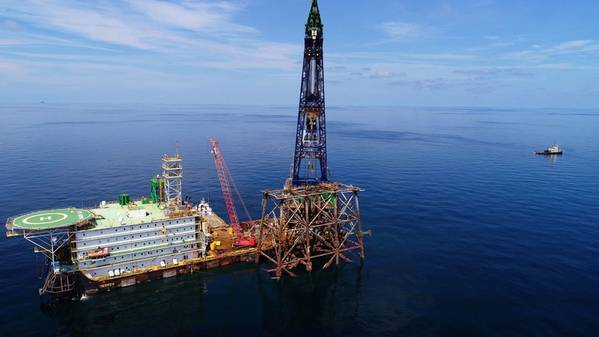 A new report from a U.S. offshore services trade group details alleged Jones Act violations by a foreign-flagged vessel in the U.S. Gulf of Mexico.

The Offshore Marine Service Association (OMSA), which recently launched its Jones Act Enforcer program to document and report violations of the U.S. law requiring seaborne cargo shipped between two U.S. points to be carried by American-built, crewed, and owned vessels, said it received a tip from an industry stakeholder that Louisiana-based Triton Offshore had posted photos on social media showing its Chinese-built, Vanuatu-flagged derrick barge Epic Hedron, also known as Triton Hedron and DB Hedron, transporting cargo between points off the coast of Louisiana.

"The Jones Act is a simple law," said OMSA president Aaron Smith. "Vessels transporting cargo between U.S. points must be built in the U.S. It is also an important law because it protects U.S. workers from unfair competition from foreign workers willing to accept wages far below what any U.S. citizen could or should accept. In this report, we've detailed how a company—by their own admission—used a Chinese-built vessel to transport cargo. That's illegal."

In its allegation report, OMSA claims the Epic Hedron used its heavy-lift crane to pick up oil platform jackets and carried them for miles across the Gulf of Mexico while the cargo remained suspended in the air. OMSA noted that this type of transportation is known to have higher safety risks than if the pieces of the platform had been placed on a U.S.-flagged barge for transport.

"We cannot discuss matters that are or will be in litigation," Triton Offshore president Roy Buchler said when reached for comment.

"The Epic Hedron has racked up a shocking number of violations, and in each case, it seems they were told 'just don't do it again,'" Smith said. "If that were a U.S.-flagged vessel, the U.S. Coast Guard would have prevented it from leaving the dock and the crew might even face criminal penalties. Foreign-flagged vessels should play be the same rules."

The OMSA report also detailed how the Epic Hedron has violated international safety regulations by failing to utilize its Automatic Identification System (AIS), which provides real time and historical vessel location tracking, though the U.S. Coast Guard has regulations allowing vessels like the Epic Hedron to turn this system off. As part of its report, OMSA requests the Coast Guard change this regulation.

"I think more people, not less, need to know what the Epic Hedron is up to," Smith said. "It, and all other Chinese-built vessels, should be publicly broadcasting their activities. The question is why aren't they?"