Oil Jumps on Weather Concerns in Gulf of Mexico 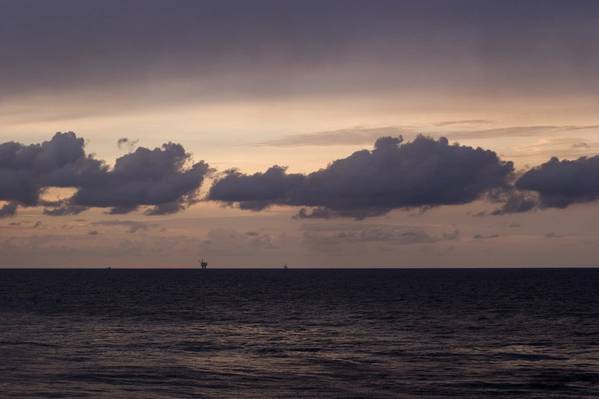 Oil prices jumped 2% on Friday after three days of losses, driven higher as a storm formed in the Gulf of Mexico, but were on track for a weekly fall as investors braced for the return of Iranian crude supplies after officials said Iran and world powers made progress a nuclear deal.

A weather system forming over the western Gulf of Mexico has a 40% chance of becoming a cyclone in the next 48 hours, the U.S. National Hurricane Center (NHC) said on Friday.

"This early storm prompted traders to buy crude ahead of the weekend in anticipation of potential production shut-ins," said Phil Flynn, senior analyst at Price Futures Group in Chicago.

The gains were limited by the expectation that Iran could add a million or more barrels per day of oil production later this summer.

The two contracts are on track to fall about 3% on the week—their biggest loss since March—after Iran's president, Hassan Rouhani, said the United States was ready to lift sanctions on his country's oil, banking and shipping sectors.

U.S. energy firms added oil and natural gas rigs for a fourth week in a row as higher oil prices prompt some drillers to return to the wellpad.

The oil and gas rig count, an early indicator of future output, rose two to 455 in the week to May 21, its highest since April 2020, energy services firm Baker Hughes Co said in its closely followed report on Friday.

Iran and world powers have been in talks since April on reviving the 2015 deal and the European Union official leading the discussions said on Wednesday he was confident a deal would be reached.

Still, investors remain upbeat about fuel demand recovery this summer as vaccination programs in Europe and the United States would allow more people to travel, although rising cases across parts of Asia are raising concerns.

Option bets on oil prices rising above $100 for the December 2021 Brent contract have jumped after last week's surprisingly strong U.S. inflation data, with open interest on calls nearly tripling in May, JPMorgan analysts said. The bank's forecast is for Brent to end 2021 at $74.

Barclays expects Brent and WTI oil prices to average $66 a barrel and $62 a barrel, respectively, this year. It cut demand estimates for the Emerging Markets Asia (ex-China) region, flagging the risk of further downside if the recent surge in infections persisted.

"Extended mobility restrictions in the region might slow the demand recovery somewhat, but seem unlikely to stall it for a sustained period, given largely positive results of vaccination programs worldwide," it said.