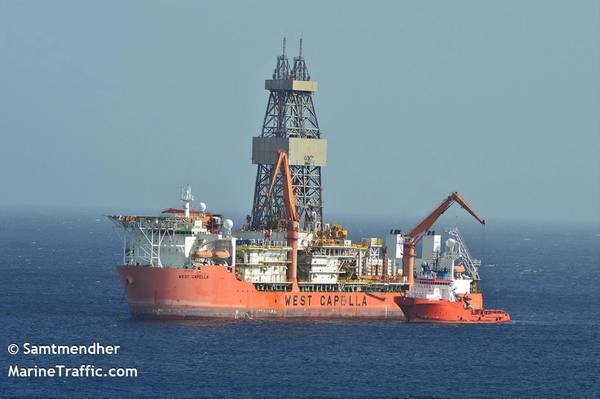 An oil exploration vessel contracted by Malaysian state energy company Petronas that was involved in a standoff with a Chinese survey vessel in the South China Sea left the disputed waters on Tuesday, three security sources and the vessel operator said.

Petronas has been conducting exploration activities near an area claimed by Malaysia and Vietnam as well as by China since late last year. In mid-April, the Haiyang Dizhi 8 - the Chinese government survey vessel - started operating in the area, escorted by coast guard and China Maritime Militia vessels.

Three American warships and an Australian frigate conducted a joint exercise near the site of Petronas' operations amid the standoff last month.

The West Capella, the vessel contracted by Petronas, left the waters as it has finished its exploration activities in the area, the sources said. They did not want to be named as they were not authorised to speak to the media.

Petronas' contract for the vessel with offshore drilling company Seadrill was scheduled to end this month.

Malaysia's foreign ministry and Petronas did not immediately respond to a request for comment.

Seadrill's communications director Iain Cracknell confirmed that the West Capella has left the area after completing its planned work.

The data showed the vessel has been moving within Malaysia's exclusive economic zone in a hash-shaped pattern consistent with carrying out a survey, as it did during a tense standoff in Vietnamese waters last year.

The Washington-based Asia Maritime Transparency Initiative (AMTI) has said the China-Malaysia standoff has been going on for months.

China has denied reports of a standoff, saying that the Haiyang Dizhi 8 was conducting normal activities.

The incident prompted the United States to call on China to stop its "bullying behaviour" in the disputed waters.

The United States has also accused China of taking advantage of the distraction of the coronavirus pandemic to advance its presence in the South China Sea.

(Reporting by Rozanna Latiff and A. Ananthalakshmi; editing by David Evans)