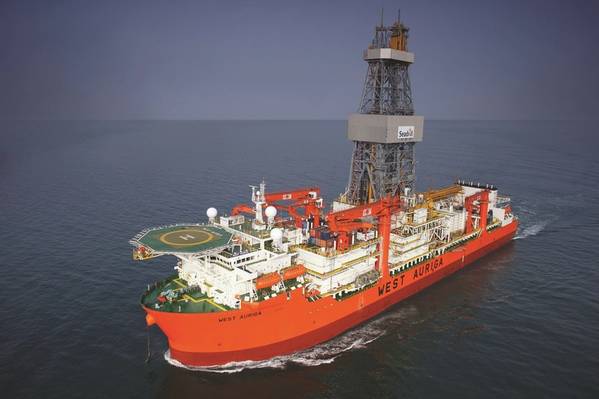 The West Auriga, under contract to BP through October 2020, batch drilled the wells and will carry out some of the batch completions (Photo: Seadrill)

With the Argos semisubmersible due to begin production from BP’s Mad Dog field in late 2021, the drilling team needed to ensure the drilling campaign stayed on schedule.

BP did this by dedicating and integrating experienced drilling engineers and geoscientists to plan, monitor and respond during the execution.

“We can’t maximize the efficiency of the facility if all the wells aren’t drilled,” says Paul Johnston, Mad Dog reservoir development area manager. “We’re trying to manage an early arrival of the facility.”

As of mid-November, Johnston says, the team is set up to deliver nine production and four injection wells on time if completions go as expected.

“We have completed the pre-drills,” says Emeka Emembolu, vice president reservoir development for the Gulf of Mexico.

The drilling campaign targeting the Miocene sands has “gone well,” Johnston says. “We’ve taken a big step toward making sure these wells are ready in time for when the facility to shows up.”

Seadrill’s West Auriga, under contract to BP through October 2020, batch drilled the wells and will carry out some of the batch completions. Another rig will begin a contract in the second quarter of 2020 to finish the completions program.

The wells will produce oil and gas to the Argos semi, which will be moored in 4,500 feet of water in Green Canyon block 782. Argos nameplate production is 140,000 barrels per day of oil and 75 million cubic feet per day of gas.

“Will we have that capacity in the ground? We think so. Do we know how these wells are going to flow? No. We’ll have to turn them on,” Johnston says. “We haven’t done the completions. It’s oil and gas, lots of things can happen. But we feel comfortable that we may have an extra well in the bank from what we’ve promised. It’s an insurance policy if a well doesn’t show up the way we expect.”

The Mad Dog 2 project has been a long time coming. BP originally found what was thought to be a pool of 1 billion barrels of oil in place at the Mad Dog prospect in the deepwater Gulf of Mexico in 1998. First oil to a truss spar followed in 2005. Seismic, appraisal drilling and production data increased the reserves in place estimate to 5 billion barrels of oil by 2011. Between 2014 and 2016, BP drilled three wells aimed at lease retention and delineating the reservoir. BP and its partners, BHP and Chevron, sanctioned the Mad Dog 2 project as a standalone production facility serving 14 production and 8 injection wells and first oil targeted for 2021.

While the spar is equipped to handle both drilling operations and production, “the efficiency of drilling from a spar is a lot lower than drilling from a dedicated drill unit,” Emembolu says.

Beyond that, the spar limits step-out options. Using a drillship provides flexibility in addition to time and cost savings, Emembolu adds.

One of the themes for Mad Dog 2 has been price reduction. An earlier plan to develop the reserves, dubbed Big Dog, would run $22 billion. The current plan more than halved the price tag to $9 billion.

The Mad Dog 2 team has used efficiencies such as using a dual derrick rig, stack hopping and rebasing well design along with an integrated performance model to slim down drilling costs. In a September speech, Bernard Looney, BP chief executive, upstream, said, “Well-drilling is down by an average of $46 million per well on Mad Dog 2.”

“Wells were repeatedly going faster,” Johnston says. One of big challenges and big successes of the project to date, he says, has been managing the pace of activity to design and safely drill the wellbores through an evolving understanding of a complex geological environment.

Johnston says the drilling team has had “fantastic” learning from one well to the next.

And some of the learnings were counter-intuitive.

“One of the things we learned was we had to go slow to go fast,” Johnston says.

The wells target naturally regressed Miocene sands that are weaker than the surrounding shales. Using the correct mud weight keeps the wellbore stable and prevents losses into the formation. But that alone wasn’t the solution. BP found that by slowing drilling rates down in these sections, the drillers created a more stable environment for handling the pressures.

“We didn’t see the losses we saw in earlier wells,” Johnston says. “We went from 200 feet per hour to 70 feet per hour. It’s slower, but it’s safer. It’s a good technique.”

Another technique that saved time was removing a casing string by changing the overall casing design.

One of the efficiencies was a result of re-evaluating the casing design. By reevaluating the pore pressure and drilling trajectories, the engineering team was able to safely deliver a design that had one less casing string in it than the earlier wells. This removed the flat time associated with running the string and had the added benefit of minimizing personnel exposure to handling equipment, Johnston says.

The West Auriga’s dual derrick design further drove efficiency with the drilling campaign. The team was also able to move the blowout preventer during batch drilling without bringing it to the surface, to create further time savings.

Once Argos is online and receiving hydrocarbons, Johnston says, BP will study production data for six to 18 months to better understand the field and see which injectors support which producers. With that understanding, he says, the team will drill the remaining wells planned for the field.

“We have a model today, thousands of models. We don’t really know which one’s right. We’ll learn from the wells and production data to see where future wells need to go,” Johnston says. “You’re not just drilling a well, you’re drilling a well surrounded by geology. We’ll take our best learnings from the subsurface and use that information to inform our forward path and what we do on the next well.”