The rig was contracted to ExxonMobil for its Nigeria offshore operations in February 2018 and was scheduled to end February 2020 but now Shelf Drilling says the rig is expected to be available for any other assignment as from February 2021.

ExxonMobil, which is engaged in shallow water and deepwater development program in Nigeria including Erha, Erha North, and Usan fields, had earlier indicated it was ready to recommence drilling in the shallow-water blocks in 2019 using two rigs that it had already contracted.

For Shelf Drilling, the Nigerian offshore market remains an exciting investment destination, with the company saying at the end of 2018 it had six rigs contracted offshore Nigeria up from two between 2015 and 2017 despite a multi-year decline in near shore activity in West Africa.

According to the company’s 2018 financial results, Nigeria’s offshore market, being one of those Shelf Drilling predicts has the potential to increase in coming years, represented $71.7 million or 7.7% of the company’s contract backlog by December 2018.

“We believe that Shelf Drilling is well positioned for the activity rebound in the region owing to our scale of operations, efficient cost structure and compliance with the local content requirements,” said Shelf Drilling in a previous statement.

Among the rigs currently committed to offshore Nigeria oil and gas exploration companies is Modec 300-C35 Trident VIII that has been contracted to Amni International Petroleum Development Company Limited, a Nigerian independent oil and gas exploration and production firm that is also engaged in subsea flow line transportation and pipeline systems.

The rig’s contract runs for a year up to June 2020 with the oil explorer having an option of two more wells.

Previously, Amni had deployed Shelf Drilling’s other rig the Adriatic IMLT 116-C for its Nigeria offshore drilling operations that were completed in October. Although Shelf Drilling had requested to deploy the rig temporarily to another operator because of the nearly five months delay in rig mobilization, latest company reports indicate the rig was last October contracted to another Nigerian firm Conoil Plc with the commitment running up to August 2020.

Even as Shelf Drilling samples the inherent opportunities in Nigeria’s offshore space, and indeed West Africa, the company looks forward to using the current global rig market trend towards recovery to modify its contract pricing method, which it currently bases on dayrates, now at the lowest levels in years.

“We believe that 2019 will be a transitional year as the market continues its recovery with utilization improving across the industry but that dayrates will continue to lag, other than in a few key markets where we are seeing signs of an improvement in rates,” the company says in its 2018 annual report.

Shelf Drilling admits there is intense price competition among the international rig market players and it is proposing to shift its charges from dayrates to footage basis.

“While we plan to continue to perform services on a dayrate basis, market conditions may dictate that we enter into contracts that provide for payment based on a footage basis, where we are paid a fixed amount for each foot drilled regardless of the time required or the problems encountered in drilling the well, or enter into turnkey contracts whereby we agree to drill a well to a specific depth for a fixed price and bear some of the well equipment costs,” said Shelf Drilling.

The improvement of the uptake of Shelf Drilling’s jack-up rigs in Nigeria, resonates with the current global trend of a recovering offshore rigs market with projections of a steady growth in coming days on the back of surge in oil demand, positive performance of economies in regions such as West Africa and growing appetite for unexplored offshore oil and gas assets. 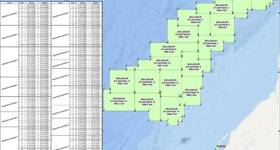