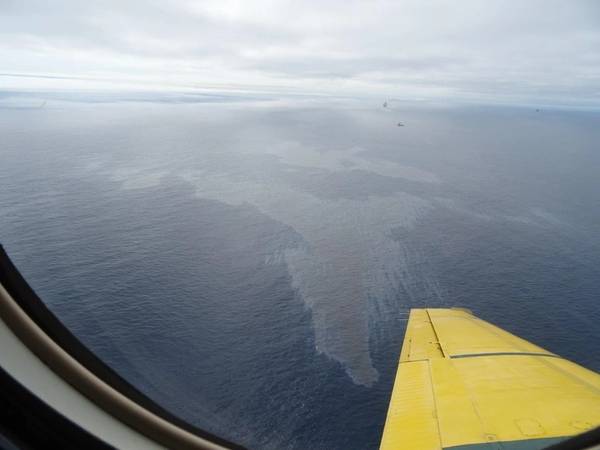 A picture of an observed slick taken by a CCG observer on the overflight on Wednesday afternoon. The slick in the image was estimated to be approximately 4.6 kms at its widest part. Satellite imagery taken as of Thursday morning showed two slicks: the first being 1.71 km2 and 3.27 km in length and the second being 6.64 km2 and 3.78 km in length. (Photo: C-NLOPB)

Production has been shut down at the Hibernia oil platform off the coast of Atlantic Canada as crews work to clean up an oil spill from the ocean.

A sheen was first spotted on the water near the platform on Wednesday and production was halted to deal with the spill, a mix of oil and water, estimated to total around 75 barrels, Canada's offshore safety regulator said.

The discharge occurred during routine activities related to removing water from one of the storage cells, said Hibernia Management and Development Co Ltd (HMDC), which operates the  220,000-barrel-per-day platform located 315 kilometers from St. John’s, NL.

All workers are safe, and no affected marine life or seabirds have been seen by government or industry observers in the area, according to Canada-Newfoundland and Labrador Offshore Petroleum Board (C-NLOPB). HMDC is working with authorities to investigate the cause of the spill.

A spokesperson from Hibernia's largest shareholder ExxonMobil told Reuters that the company could not say how long production would be shut down.

“We’re disappointed the discharge occurred, but we are working diligently to minimize impacts on the environment,” Scott Sandlin, president of HMDC, said in a statement on Thursday.

A response vessel in the area has deployed a single vessel side sweep (SVSS), a boom-type system deployed over the side of a vessel to collect oil from the water. A skimmer is then used to collect the oil from the SVSS and store it on the vessel for disposal in accordance with waste management regulations. Other response activities have included mechanical dispersion, deploying sorbent boom, deploying a tracking buoy, and surveillance flights.

The C-NLOPB said it has been in continuous contact with HMDC as well as partnering government agencies, including the National Environmental Emergencies Center of Environment and Climate Change Canada and the Canadian Coast Guard (CCG) in monitoring the operator’s response and the deployment of resources related to oil recovery.