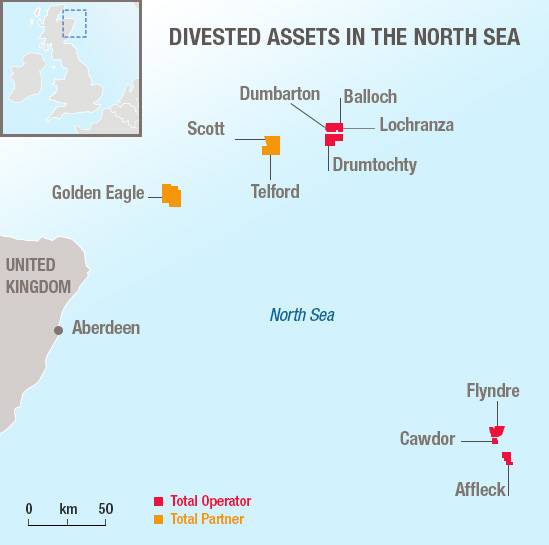 French oil major Total has sold its stakes in 10 UK offshore fields to Petrogas NEO for $635 million, as the majors continue to divest non-core assets to private equity-backed companies looking to expand their upstream footprint in the region.

The buyer, a new joint venture between the exploration and production arm of the Oman-based conglomerate MB Holding, Petrogas, and Norway-based private equity investor HitecVision, picks up an asset package located in the Eastern North Sea that was formerly owned by Maersk Oil.

Ross Cassidy, a senior research analyst on Wood Mackenzie’s North Sea team, said, “The key asset in the package is the CNOOC- operated Golden Eagle field, which accounts for over half of this year’s expected production and most of the remaining value. The field is expected to produce to 2030.

“Several of the fields are due to cease production by 2025 and have near-term decommissioning liability. The new operator will no doubt aim to extend the life of these fields with fresh investment.”

Total: Still big in the North Sea
Arnaud Breuillac, President Exploration & Production at Total, said, “This transaction is consistent with our portfolio management strategy, aiming at lowering our break-even point by optimizing capital allocation and divesting high technical costs assets. Our primary objective is to maintain the organic break-even before dividend below $30 per barrel and high-grading our portfolio will help us achieve this.”

Total became the second largest operator in the North Sea with its acquisition of Maersk Oil in 2018, and even after the latest sale the area remains as one of its core areas. The region is home to some of the group’s current major projects, including Culzean, which started up last month in the UK, and Johan Sverdrup in Norway with first oil planned later this year.

Cassidy said, “The rationalization of Total’s UK portfolio was expected following its takeover of Maersk in 2017, and is part of Total’s corporate strategy to lower the production costs of its global portfolio.

“However, even with this sale, Total remains one of the UK’s top producers in 2019, with production underpinned by Elgin-Franklin, Laggan-Tormore and Culzean.”

The buyers
Petrogas is part of MB Holdings, a family-run company specializing in drilling and oilfield services, mining and marine engineering, alongside exploration and production of oil and gas. It currently produces 35,000 boe/d from onshore Oman and offshore Netherlands, Liam Yates, from Wood Mackenzie’s Middle East upstream team, said.

Yates added, “The company entered the North Sea and became an offshore operator through its acquisition of Chevron’s Dutch portfolio in 2014. Since, it has contributed to reserves growth in a portfolio of mid-late life assets using its strong exploration background.

“This deal transforms its production profile, remaining reserves and value. It has a strategy of expanding overseas and the North Sea is becoming a core area of focus.

“Petrogas specializes in mature, producing assets where it can leverage its subsurface expertise to increase production. It also operates in Egypt, Denmark, and Germany.”

Cassidy said, “The combination of Petrogas and HitecVision in the UK is a promising sign for investment in the UK upstream sector. The new Petrogas NEO joint venture aims to grow its UK production to more than 100,000 boe/d over the next two to three years.”