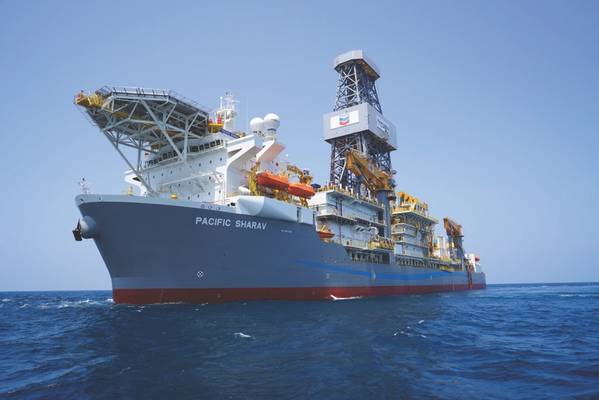 Deepwater drilling is back and targeting ever deeper waters, from South Africa to Pakistan.

Deepwater exploration is starting to get serious, again. If fact, French oil major Total is lined up to drill what will be a new deepwater drilling record later this year, offshore Angola. At about 3,600 meters water depth, it will break a previous record set by total at the Raya-1 well in Uruguay in 2016, at 3,400 meters.

The stakes are big but so are the prizes, and that’s what’s driving renewed interest. It’s a turnaround compared with 2015, when analysts Wood Mackenzie said that, since late 2014, 68 major projects and 27 billion barrels of oil equivalent (BOE) of commercial reserves have been deferred, due to the oil price crash. In the last five months of 2015, deepwater projects had been hit hardest, accounting for over half of the total $380 billion of total project capital expenditure (capex) deferred (real terms), from the 68 projects.

Now, following a year of relatively steady oil prices in 2017, and strides made in project economics made since 2014, spending is once again expected to increase. In November, Wood Mackenzie said total annual deepwater capex is expected to rise from around $50 billion currently to nearly $60 billion by 2022, driven by big projects developing already made discoveries in Guyana, Brazil and Mozambique.

Exploration successes, particularly in Guyana, where more than 5 billion barrels has been found since 2015, with breakeven oil prices in the $30s/barrel, is also driving interest. According to Wood Mackenzie, the number of risky deepwater frontier wells increased from six in 2016 to 21 in 2018, although only two made commercial discoveries and both were in Guyana.

“The reality is that deep water is where the best opportunities are, because of lot of deep water, off the shelf basins are still relatively lightly explored,” says Wood Mackenzie’s Andrew Latham. Production from mature basins onshore and in shallow water is declining, leading operators into deeper waters. “The big untested prospects happen to be mainly in deep water or countries that are for various reasons more challenging to access. We are seeing NOCs explore non-deep water and for IOCs that want ready access to opportunities, deep water is where it is.”

Total is leading this game by a margin. “Most people transfixed by the success of ExxonMobil in Guyana and, before that, Eni in Mediterranean,” says Latham. But, he says, Total is clearly a major player in this area. “Total has quickly been getting involved in a string of discoveries, both non-operated, including Ballymore in the US Gulf of Mexico (operated by Chevron), Calypso in Block 6 offshore Cyprus (operated by Eni), and its own. For a lot of our ‘wild cats to watch’ this year, their name keeps coming up.”

Africa
Indeed, Total is leading the pack in African deepwater exploration. While West Africa hasn’t been as busy as it used to be, it is due to be home to Total’s ultra-deepwater exploration well on Block 48, which is Angola’s current most outboard license and a potential play-opener. At 3,600 meters, it would be the deepest water well drilled to date. Block 48 is in the Lower Congo Basin, some 400 kilometers northwest of Luanda and 200 kilometers West of Soyo onshore facilities.

Success in Block 48 would come hot on the heels of Total’s successful Brulpadda well offshore South Africa, completed in February. A reentry well, Brulpadda-1 is in 1,432 meters water depth in the frontier Outeniqua basin, 175 kilometers offshore, and was drilled using Odfjell Drilling’s Deepsea Stavanger semisubmersible rig. Pegged as a play opener, Brulpadda has prospective volumes of around 1 billion BOE. 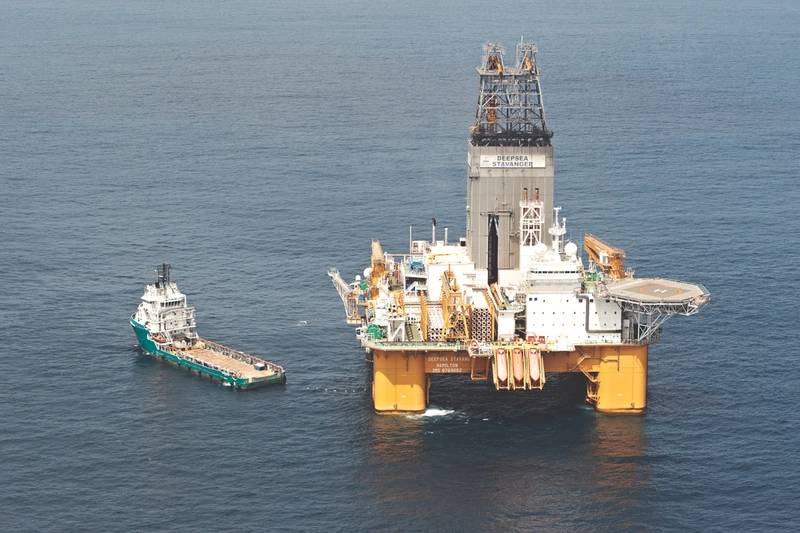 Total also has its sights on another deepwater target, the Venus-1 well in Namibia’s ultra-deep Block 2913B (2,500-3,250 meters). Venus-1 has potential to be the year’s largest discovery, says Latham. The ultra-deepwater wildcat will target 2 billion BOE in a giant Cretaceous fan play, close to the South African maritime boundary.

Total is also operator of the planned Rufisque Profonde-1 exploration well offshore Senegal, which is expected to be in about 3,000 meters water depth.

Gulf of Mexico
The US Gulf of Mexico is in many ways an established basin, but there are big new plays being proven and tested – in deep water. “The last couple of years has seem some tremendous success in the Gulf of Mexico, including the Whale and Ballymore discoveries, driving further interest,” says Latham.

Shell made the Whale discovery in 2017, in 2,400 meters water depth, in the Wilcox formation in the Perdido Fold Belt, in Alaminos Canyon Block 772, adjacent to Shell’s Silvertip field and about 16 kilometers from the Perdido platform. Chevron’s Ballymore find (in which Total is a partner), meanwhile, was made in 1,992 meters water depth in the Jurassic Norphlet play using Pacific Drilling’s Sharav deepwater drillship. “Those two successes in last 18 months have really focused attention on the Gulf of Mexico and we expect we will see a string of important wells there this year,” says Latham.

Latham highlights the Jurassic play. Shell’s 2,250 meters depth Appomattox development, in Mississippi Canyon Block 392, due on stream this year, will mark the first production from a Jurassic reservoir in the US Gulf of Mexico, paving the way for future exploration and development from an area that had perhaps previously been overlooked.

“This area (the Jurassic) has surprised the industry,” Latham says. “Despite the great depths at which they’re buried, the Jurassic dune sand stones still have highly remarkable porosity causing people to think again about the potential of this play.”

Chevron is due to spud Kingsholm-1 in the US Gulf of Mexico toward the end of the first quarter. The prospect is high-pressure, high-temperature (20,000 psi) and holds an estimated 300 million BOE of resource.

There are two main stories in the Gulf of Mexico, says Latham. Operators like LLOG are looking for 30 million barrell prospects, that are low risk and can add valuable barrels to core assets. Meanwhile, Chevron’s Ballymore, containing some 500 million to 1 billion BOE recoverable, is a standalone project in scale, says Latham, found by targeting higher risk, harder to drill wells at 9,000 meters plus target depth.

Mexico
While the next two oil and gas acreage auction rounds have been set back in the Mexican Gulf of Mexico, exploration activity hasn’t, and new entrants are bringing a fresh approach into an established basin.

Exxon and Total are together targeting the ultra-deepwater Etzil prospect in Block 2 of the Perdido Fold Belt, awarded in Mexico’s hydrocarbon auction Round 1.4 in 2016.  It’s been reported to cover some 80 square kilometers and potentially contains 2.7 billion BOE.

Equinor and Murphy Oil are also drilling wildcats; Equinor, with partner Total, in Block 3 in the deep waters of the Gulf of Mexico’s Salina del Golfo Basin, and Murphy on the Cholula prospect, formerly known as the Palenque well, on Block 5.

“While Pemex has a reasonably long history drilling wells in the Mexican Gulf of Mexico, the deep water is very lightly drilled,” says Latham. “Any basin that has been under a monopoly for a long time hasn’t had a diversity of ideas. Fresh ideas and concepts are likely to lead to some success here.”

Brazil
After a lull in exploration in recent years, activity is returning to Brazil. Results are expected soon on the Peroba well, targeting a giant pre-salt prospect in Brazil’s Santos basin. Peroba, which lies on trend with the giant Lula discovery in 2,100-2,600 meters water depth, is estimated to hold recoverable volumes up to 1 billion BOE. “If the well is successful, partners Petrobras, BP and CNODC (China National Oil and Gas Exploration and Development Corporation) are likely to be sitting on a very significant find,” says Latham. Going to press, operations were ongoing.

More wells are coming, with Shell, Equinor and BP lining up multiple targets and ExxonMobil with one well currently planned, says Latham. BP’s prospects are expected to include the first Amazon Mouth well later this year.

“It’s definitely busier than it has been here,” he says. “Brazil went through quiet phase as Petrobras focused on appraisal. Now we are entering another wave of exploration and these are all standalone-scale projects, mostly in the Santos Basin.”

There is also the Jethro prospect, in 1,350 meters water depth on the Orinduik Block, offshore Guyana. This well is on acreage adjacent to ExxonMobil’s prolific Stabroek Block and will target a 200 million BOE prospect in the same play as the recent Hammerhead find.

Mediterranean
Having risen dramatically in prominence in recent years, the Mediterranean remains an active area. Recent developments in Israel, with the giant Tamar and then Leviathan discoveries, and, since then the fast track of Zohr, really put it the region on the map. Last year, Eni made the Calypso discovery in Block 6 offshore Cyprus, in 2,074 meters water depth, following Aphrodite in 2011. 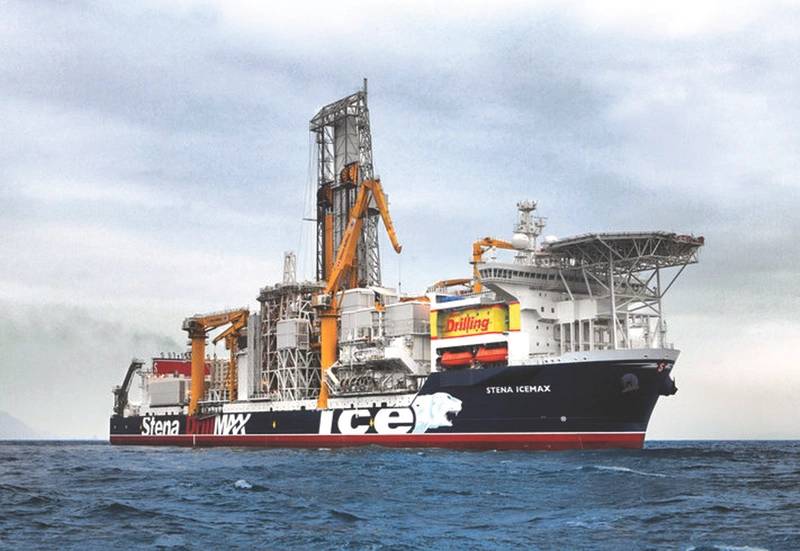 The first well in Lebanon is due on Block 4 by Total, although the date has slipped. “This is a pretty big province and pretty lightly drilled,” he says. “One of the attractions of discoveries that have been made is they can be developed with very few development wells. You get an enormous recovery rate from single wells, for that play; greater than100 million BOE a well. Egypt has a tremendous domestic gas market and the same with Israel, so there is a market. As volumes get bigger, the requirement to start exporting to Europe will emerge and there are various possibilities to get the gas to Europe.”

Other regions
Shell has lined up the Noble Globetrotter II drillship to sink a frontier exploration well in the Black Sea offshore Bulgaria in the first quarter of this year.

While not in the deepest water from a global perspective, Siccar Point’s Blackrock prospect, West of Shetland, is a deepwater well in UK Continental Shelf terms, at 1,100 meters water depth. Siccar Point announced in March it commenced spudding an exploration well at Blackrock using the Diamond Offshore semisubmersible rig Ocean GreatWhite.