According to a press release from the utility giant, since 2013, Tepco has been conducting Japan’s first demonstration test of offshore wind power facility (rated output: 2,400 kW; bottom-fixed foundation turbine), which is located south of Choshi, Chiba Prefecture.

During the demonstration, Tepco continuously monitored test data with the aim of confirming technologies necessary to introduce and expand offshore wind power facilities. The demonstration provided Tepco with valuable experience in operating and maintaining the facility in harsh weather and marine conditions, as well as ensuring equipment safety and resistance to damage from saltwater.

As a result, the demonstration test proved conclusively that Tepco’s facility is safe and can be operated at a high capacity factor.

With this goal in mind, Tepco announced on November 1 that it had begun conducting a seabed survey off the coast of Choshi to examine the feasibility of developing an offshore wind farm in that area.

Going forward, Tepco will expand its use of renewable energy sources to support the company’s provision of stable electricity supply. By engaging in businesses with minimized environmental impact, Tepco expects to help counteract the effects of global warming while continuing to contribute to Japan’s energy and environment policies. 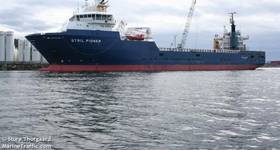