Eni's Indonesia Gas Project to Start Up in 2021 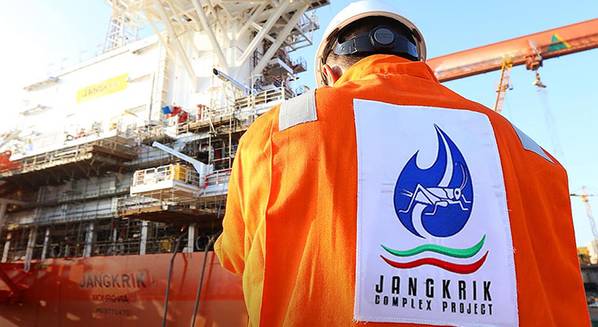 Energy company Eni aims to start output of natural gas from its offshore Merakes project in Indonesia in 2021, the country's deputy energy minister said on Tuesday.

A spokesman for Italy's Eni did not immediately respond to a request for comment on the matter.

The targets are part of an amended development plan for the East Sepinggan block in the Makassar Strait under a new production sharing contract that is expected to be completed before Dec. 12, he said.

As part of the revision, the contractors have agreed to adopt a gross split scheme, whereby Eni and its partner Pertamina would take 67 percent of crude oil and 72 percent of natural gas production from the project, and the Indonesian government would take the rest.

It was not immediately clear what split was set previously. Eni said in April it had obtained approval for plans to pipe natural gas from Merakes to the Bontang liquefied natural gas (LNG) processing facility in East Kalimantan.

The amendment would be first time a conventional cost-recovery production-sharing contract in Indonesia is converted to use the gross split scheme, Tahar said.

"By using the gross split scheme, it will be simpler and they don't need a lengthy tender process, so they see it as an opportunity," Tahar said, referring to Eni's proposal to make the switch, which he said had been received two weeks ago.

Indonesia recently adjusted its gross split mechanism for new and expiring oil and gas production sharing contracts, whereby contractors shoulder the cost of exploration and production, rather than being reimbursed by the government.

The changes were intended to attract investment amid tepid interest in Indonesia's energy tenders and after the industry pointed to more attractive opportunities in other countries.

Tahar said the Merakes project has an estimated 814 billion cubic feet of natural gas reserves and an economic lifetime of around nine years.

Eni holds an 85 percent participating interest in the contract via its local unit Eni East Sepinggan Limited, while Indonesia's Pertamina has 15 percent. With the revision, the contract duration up to July 19, 2042, will not change, Tahar said.