GDF Suez, which will operate Cygnus on behalf of partners Centrica and Bayerngas, anticipates first production from this large, shallow water gas field in late 2015. With estimated gross proven and probable reserves of 720bcf, it is the UKs sixth largest gasfield in terms of remaining resources and is expected to account for around 5% of the country's gas production at peak in 2016. The partnership acknowledged that the UK governments recent field allowance for new large shallow water gas fields had provided the certainty and confidence to proceed with this complex development.

Cygnus is located in UKCS blocks 44/11 and 44/12, about 150km off the coast of Lincolnshire. The detailed development concept for the field consists of two drilling centres, four platforms and initially 10 development wells; the planned export route is through the ETS (Esmond Transportation System) pipeline to the Bacton gas terminal in north Norfolk.

To kick start the project, GDF Suez signed initial contracts worth Â£375 million on 6 August and will be awarding other contracts as work progresses.

Heerema Fabrication Group (HFG) and Burntisland Fabrications (BiFab) were both awarded frame fabrication contracts. The HFG contract, to be carried out at the groups Hartlepool yard, is expected to include fabrication and commissioning of some 10,500te of topsides destined for the three bridge-linked Cygnus Alpha drilling, processing and accommodation platforms and the not normally manned Cygnus Bravo wellhead facility to the west. Topside packages will include a 3900te process & utilities module, 1600te wellhead module and 1500te compression module on Alpha and a 2800t wellhead module on Bravo.

Fabrication of the Alpha wellhead topsides is due to start in December 2012 for completion in March 2014, with fabrication of the PU module, 200te and 250te bridges, 250te flare, and Bravos wellhead topsides slated to begin in June 2013 and complete in April 2015. Work on Alphas compression module is expected to start in December 2013 and be ready for installation onto the PU topsides in 2015.

Tino Vinkesteijn, chief commercial officer of Heerema Fabrication Group, commented: This assignment will possibly be our single most important award for Heerema Hartlepool, especially in the context of the current economic turmoil. It would, he added, generate more than one million manhours of work over the three years as well as creating additional work for the supply chain in the northeast of England and further afield.

BiFabs contract is anticipated to include engineering, procurement and construction of the four Cygnus jackets and piles with a total weight of 8000te plus fabrication of the 3500te utilities/quarters deck. This work, with an initial value of £47 million, will be undertaken at the companys Methil and Burntisland facilities in Scotland as well as the Arnish yard on the Isle of Lewis, with deliveries phased between April 2014 and April 2015. BiFab also recently landed a £145 million contract for the 3500te topsides and 8000te jacket for another UKCS field, Solan, being developed by a joint venture of Premier and Chrysaor.

Amecs London-based team did the FEED work for Cygnus and now follows through with the £60 million contract for detailed engineering design. Saipem will lay the 50km export line to the Esmond Transportation System, while driller Ensco will deploy its ENSCO 80 jackup for the developments horizontal wells. Seaway Heavy Lifting will transport and install the Cygnus infrastructure in 2014 and 2015 using its heavy lift vessels Stanislav Yudin and Oleg Strashnov 4.

Partner interests in Cygnus are GDF Suez 38.75%, Centrica 48.74% and Bayerngas 12.5%. The field was discovered by Marathon in 1988/89 but at the time was deemed too small to be developed economically, partly because of its tight gas reservoir. GDF acquired the licence in 2002 and a more encouraging picture subsequently emerged following five successful appraisal wells.

GDF, intent on becoming a major North Sea player, is stepping up its regional E&P operations (OE last month). Earlier this year, the company secured UK Department of Energy & Climate Change approval for development of the Juliet gas field in block 47/14b, a 2008 discovery now due onstream in 4Q 2013 and expected to produce 80mmcf/d at peak. It also sees upside in Cygnus and is looking to drill an exploration well with the ENSCO 80 in the northern part of the complex next year. OE 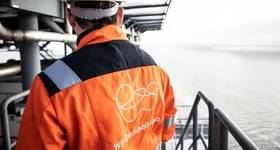