One person is missing and another six were injured following the sinking of Saipem's Perro Negro 6 jackup rig off the coast of Angola.

The incident began Monday night (July 1) following the collapse of seabed underneath one of the Perro Negro 6's three legs, Saipem said. The rig suddenly tilted and suffered hull damages, causing water intake. At 10:30 a.m. CEST Tuesday July 2, the rig sank with no personnel onboard.

"The emergency procedures were promptly activated last night to ensure the evacuation of the personnel on-board. After the sudden and significant tilting, among the 103 crew members, one was recorded missing and another six incurred minor injuries," the company said.

Saipem announced on July 4 that the missing worker is of Bulgarian nationality.

The company said its emergency response team is now mobilized and working with Angolan authorities as well as its client's, Chevron, operational team. No environmental impacts have been reported.

The Perro Negro 6 is in the midst of a three-year contract with Chevron, which began 2Q 2012. The jackup is capable of operating in water depths of up to 350 ft. 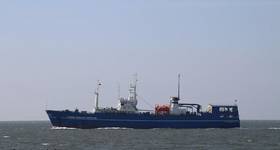