The spice of life

Statoil and ExxonMobil are seeking ways to develop the multi-trillion cubic feet of gas resources they have found in Block 2 offshore Tanzania. Elaine Maslin takes a look.

To Statoil and ExxonMobil, they are also the names of eight major gas fields (Lavani has been classified as two, Lavani main and Lavani deep), totaling some 22 Tcf of natural gas resources, which they have discovered offshore Tanzania and are now planning to bring to the market.

Discovering the resources, 100km off southern coast of Tanzania, in 2200-2500m water depth, was a challenge in itself. Now the two firms are assessing how they are going to bring these resources to market. The current concept front runner is a subsea-to-shore project – using already proven and qualified technology as much as feasibly possible.

Speaking at the Subsea Valley conference in Olso in April, Harald Eliassen, previously asset manager on the Peregrino field offshore Brazil for Statoil and now the firm’s Tanzania offshore project director, says it is early days, but this will be an interesting project for the industry to watch with technology hurdles to overcome – not least when it comes to designing pipelines that can cross the seafloor valleys in 2200m deep water between Block 2 and the shoreline.

“The project is in the early stages,” Eliassen told the event. “We have a lot of work ahead of us, both on technical solutions offshore, on the LNG plant and with the authorities. There is still a lot of time before we make a final investment decision. But still, it is an interesting project and something you should keep an eye on.”

The 14th well, and the last in the current drilling campaign, is an appraisal well on Tangawizi; it is ongoing. The Ocean Rig Poseidon drillship was used in the first exploration phase.

A crucial part of the drilling campaign was a drill stem test (DST) on Zafarani. The Zafarani-2 DST was one of the deepest tests ever done, in some 2400m water depth, Eliassen says. It tested two zones, flowed at a maximum 66 MMscf/d, constrained by equipment, confirming the production potential, reservoir connectivity and the extent of the Zafarani reservoir. The DST also gave a good indication of the production potential of the other discoveries, Eliassen says. Statoil now has some 15-16 subsurface professionals on the job to mature the understanding of the reservoirs already discovered, he says.

“Thanks to the long campaign using the Discoverer Americas, the JV has also had a learning curve drilling in Tanzania, which has reduced the number of days to drill a well in Tanzania,” Eliassen adds.

Once the latest appraisal well, Tangawizi 2, completes (due this summer), Statoil will demobilize Discoverer Americas from Tanzania and, Eliassen says, enter the next exploration phase where it will evaluate further prospects and drilling in Tanzania.

The gas in Block 2 is dry gas. Statoil believes this will produce through natural depletion, gas expansion and some aquifer support, with a recovery rate ranging from 60-80%. “It all depends on how much water support we get,” Eliassen says. “We need some to keep the pressure up, but we don’t want too much water support because the water might break through and we might have to shut the wells.“Since we will produce several discoveries into one common production system we have to manage to pressure depletion in the different reservoirs so we can reach a common pressure in the pipeline system,” he continues. “With the depletion and gas expansion as the main drive there will be no injection wells.”

It is thought that the Zafarani reservoir will need 5-7 wells, the Piri reservoir 3-5, Lavani deep 2-3, and Lavani main 3-5 wells. In total, that will add up to about 13-20 wells in the first phase of development. The results of the appraisal well on Tangawizi-2 will help decide if Tangawizi is feasible and economical to develop, and if so, this would probably be added to the production some 7-10 years after first gas. It would add another 5-8 wells and probably a second pipeline to the development, Eliassen says.

Then, there are the Mronge, Giligiliani and Mdalasini reservoirs. These have not been included in the first phase of development, partially due to the difficult seabed conditions. From the Tanzanian shoreline extending out to sea there are some very pronounced canyons and valleys, Eliassen says. (OE: February 2015) “Where our discoveries are, the valleys become even more pronounced. They are 200-300m deep with very steep edges and possibly unstable edges,” he says. “Luckily, most of our discoveries are in the core areas between these pronounced canyons. That’s why we’re starting with in this area and we have found a feasible route for the pipeline to shore, too.” But, it will not be easy. “There are still some valley crossings [on the pipeline export route]… and there are still some issues related to that, but we believe that together with industry we will be able to find solutions to protect the pipelines so they can withstand any activities in these canyons. We can see there was some activity about 500 years ago and that is not long enough ago for us to rule it out that it will not happen while we are there.”

In choosing its development concept for Block 2, Statoil looked at floating LNG, a floating production unit offshore, with the gas going into the shore for LNG production, and subsea to shore.

“The floating LNG was hot for a while,” Eliassen says, “But, as we made more and more discoveries we realized that the amount of gas doesn’t really fit the floating LNG system – it would be too small or you’d need too many units out there and it would become very expensive.” The Tanzanian government was also very keen for onshore processing, to bring benefits to the local economy.

Statoil then compared a floating unit offshore with a subsea-to-shore system. “Both were technically feasible,” Eliassen says, “So we looked at concept differentiators to see if there was anything with a floating unit that would give us a higher recovery factor, better economy, less risk, etc., and we really didn’t find anything that would pay for the extra cost of the floating production unit. So, due to the lower capex, opex and lack of differentiators, we ended up with a subsea-to-shore solution with the gas transported untreated to the LNG plant to shore.”

Statoil looked at what it had done before on the Ormen Lange subsea-to-shore project offshore Norway. This created a concept with large manifolds, dual pipelines, dual services lines, dual umbilicals, “loads of redundancy.” This was seen to be too expensive and would require mobilization of heavy lift vessels to Tanzania, where there were no heavy lift vessels before. The firm then looked at its leaner Snohvit subsea to shore development, and took that concept further – making it event leaner.

“The concept is a daisy chain layout, with no manifolds, no large modules to be lifted, simple inline Ts on the flowlines to connect each well, too,” Eliassen says. “It allows us to spread the Xmas trees around on the seabed so we have an easier well path and lower drilling costs. All of this made the system a lot cheaper and we managed to cut something like 30% of the cost from the original system we had. Cutting cost on this project is very important. It’s a huge investment project.”

Statoil is now going into an equipment and technology selection phase. Eliassen is very clear that the company only wants already proven equipment and technologies as far as is feasibly possible. “We don’t want to go into any technology development programs or technology qualification programs that we don’t absolutely have to do,” he says. “We need to get together with industry and our partners – ExxonMobil has a lot of ultra-deepwater experience – to find out if there’s anything out there we can use copy and standardize. If there is, we will do it in Tanzania.”

Based on a request by Tanzanian authorities, the onshore processing terminal will be built under a partnership between the operators on Blocks 1, 2, 3 and 4, led by BG Group.

“We believe we’ve found a feasible and cost effective solution – subsea to shore into a common LNG plant,” Eliassen says. “There are still some challenges, notably on the seabed in 2500m water depth and we need to work together with the industry and our partners to come up with cost effective solutions for this development.”

Statoil’s Tanzania office, in Dar es Salaam, has about 50 people, mostly local with about 15-20 people Norwegians. 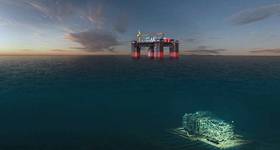 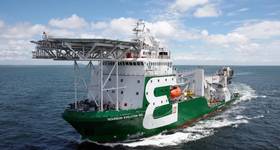