Shortening the data commute
Dynamic Drilling Systems (DDS) is gearing up to begin production of its new Apollo Dart drilling software, which will be able to provide data within milliseconds, the company’s president Bob Sage announced during the recent IADC/SPE drilling conference in New Orleans.

‘We believe in a mobile war room, where you don’t have the initial capital investment.’ Instead, Sage said, Apollo Dart is deployable to computers and PDAs, which allows for the mobile aspect of the software. ‘We’ve got clients who use it just for the PDA aspect of it,’ he added.

The software, which features an Oracle database, receives the drilling data wirelessly and visualizes it to allow the customer to mine it as needed. ‘Eventually we want to get seismic [data] in there,’ Sage said.

Soon, he added, the system will be able to use artificial intelligence to prompt an action based on the company’s programmed procedure for each type of event. ‘They’ll get an alarm on the surface when they’re fixing to stick their pipe.’

Apollo Dart is an improvement on the legacy system of the same name, which has been in use since 2005. The legacy system could provide data in 15-second increments. That wasn’t fast enough, Sage said, and the new system offers millisecond increments ‘to look at bending moments and things that happen in milliseconds’. Mark Kinkead, lead developer software architect at DDS, said: ‘We can see the future is just getting faster.’

Sage cautioned the software can only work with the data it’s been given; bad data will yield bad results. Data validation, he added, remains problematic within the industry. JP

Deep submersible motor on test track
Oil & gas sector pumps and motors specialist Hayward Tyler has confirmed that its contract to produce a deep submersible motor for the VetcoGray universal subsea boosting development project is on track for delivery by the end of July.

The contract, awarded by GE Oil & Gas subsidiary VetcoGray Scandinavia a year ago, called for Hayward Tyler to design, manufacture and deliver a 2.5 MW fourpole 6.6kV 60 Hertz test motor which will be integrated into VetcoGray’s high pressure subsea pump skid for an exhaustive programme of testing.

To date, through a team based project management process, Hayward Tyler has successfully completed all major design activities and maintained the schedule of a number of supplemental component qualification requirements, to meet a rigorous milestone schedule. The company’s deep submersible motors are already in use in seawater injection pumps designed for depths of to 3000m.

In a joint initiative with operator Woodside Energy, Fugro Survey and Hafmynd Ehf have successfully run customer acceptance trials of a Gavia autonomous underwater vehicle (AUV) down to a subsea depth of 1000m offshore Western Australia, eclipsing the former record of 220m also achieved by a Gavia vehicle.

Small and portable, the Gavia AUV is manufactured in Iceland by Hafmynd in a modular configuration enabling inclusion of various payloads such as an inertial navigation system (INS), GeoSwath bathymetric sonar and additional batteries. The model purchased by Woodside, optimized specifically for offshore surveying, is fitted with an underwater camera, sidescan sonar, multibeam echosounder, high accuracy INS, and navigation software to automatically track seabed pipelines.

In the trial the AUV was set to run a grid of survey lines at 12m above the seabed, recording both side scan sonar and swath bathymetric data, followed by a seabed habitat photo survey line run at 2m above seabed. Dive time from surface to 1000m was approximately 30 minutes.

Woodside anticipates using the AUV primarily for pipeline inspection, as well as surveys for nearshore environment, debris in restricted areas, and deepwater assessment of flowlines and other seabed infrastructure. The vehicle, managed by Fugro Survey, will be utilised from vessels of opportunity and made available for third party projects.

Bringing CFD to bear on drilling
A new tool claimed capable of revolutionising the oil & gas industry’s approach to inflow performance was launched by Senergy at the recent SPE Formation Damage conference in Lafayette, Louisiana.

Hailed as a market first in that it addresses well drilling from a computational fluid dynamics (CFD) perspective, the Wellscope tool has the capability to produce 3D models of prospective wells to estimate the inflow performance of horizontal, deviated and vertical wells under various damage and completion scenarios.

Using up to 10 million cells in each model, Wellscope is said to provide a more accurate prediction of a well’s performance. In addition, the cells can be recalculated individually or collectively at the touch of a button to provide ongoing updates of a well’s condition.

‘The complexities involved in predicting well performance prior to drilling have been one of the greatest challenges faced by the industry since its inception,’ Byrne said. ‘The standard approach has depended on generalised assumptions based on comparisons with similar wells and reservoirs instead of looking more in depth at the well and taking the findings into account.

‘The oil & gas industry has been poor at converting data in order to get a more accurate prediction of well performance. This lack of adequate modelling leads to gross generalisation of the magnitude, depth and impact of damage caused by inflow challenges and, therefore, on any well inflow prediction. Wellscope is designed to provide a much more scientific approach,’ he added. ‘It evaluates a well prior to drilling and allows exploration from every angle.’

According to SECC, what distinguishes its system from conventional options is the use of pressure-balanced technology to ensure all connectors remain balanced at any pressure and any depth. This protects subsea equipment by dispensing with guillotines and uncontrolled subsea and surface disconnections in an emergency. ‘Instead, pressure lines can be quickly disconnected – manually or automatically – under full working pressure, and because the break is 100% dry there is virtually no risk of spillage into the sea and no hazards posed to personnel,’ added the company.

Reconnection is said to be quick and straightforward, and can be completed at depths of 10,000ft or more via ROV without the need to depressurise or dewater the high-pressure hose line. Key applications envisaged for the HMHB system and its range of mid hose breakaway coupling and connectors include pumping and injection lines, vessel hoses, umbilicals and down lines.

Helix Well Ops (UK) technology manager Phil Bosworth commented: ‘After reviewing the initial concept of the coupler a few years ago, we could see the benefit it had over our existing techniques and were keen to develop it for its first use on a live well control stack offshore.’

Gunning for new technology
Pampa, Texas based perforating and cased-hole logging technology provider Titan Specialities has purchased the Select Fire Gun Switching System from Welltec for use in its perforating guns. This addressable, digital, selectivefire switch system is designed to provide increased reliability and dependability for the firing of multiple perforating guns in a single run.

The technology allows for a thorough check of all perforating guns’ firing status, readiness and connections prior to and while being run in the wellbore. The status of each gun can be checked throughout the process, and, if required, any particular gun can be bypassed on demand.

Titan has licensed the technology back to Welltec for use in its wireline toolstrings.

According to Mokveld, several operators acknowledged the axial flow design’s success in topside control applications when approaching the company to discuss the possibility of using the concept as the basis for a subsea control valve. Now the Gouda-based company, in close cooperation with subsea integrators Oceaneering, FMC and Aker Solutions, has developed and successfully qualified an 8in/API 5000 subsea axial control valve.

As well subsea anti-surge and separator control applications, the qualified axial valve design can be used for subsea HIPPS applications as per API RP170.

The new offerings In combination with different fusion bonded epoxy (FBE) materials demonstrated in industrial trials that they meet stringent performance requirements for coating large diameter steel pipes, he added. ‘Reference projects indicate a good long-term performance . . . that exceeds the requirements of DIN 30670 and of other national and customer standards,’ said Visekruna. OE 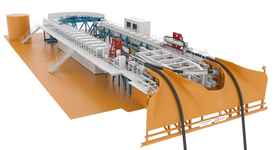