Helix Qs up for deepwater role

While the Q4000, star of the Macondo response,was in dock recently for some much-deserved TLC, Helix Energy Solutions Group chairman and CEO Owen Kratz spoke with analysts about the company’s bet on a burgeoning well intervention market and its plan to augment the ‘Q’ with an even bigger sister intervention vessel. Russell McCulley reports from Brownsville, Texas.

Some time in 2015, the Q4000 will be joined in the Gulf of Mexico by the Q-Plus, a dynamically positioned Category B semisubmersible kitted out to perform a range of subsea intervention tasks in ultra-deepwater. An investment of some $585 million, the newbuild is a bold move for Helix. But Kratz believes the market is ripe for high-end intervention.

‘The Q’ – shorthand for the Q4000 – ‘is working flat-out,’ Kratz told analysts shortly before a tour of the vessel, docked at the Keppel AmFels shipyard. ‘We’re turning away work. She’s booked up through 2013 and into 2014. So we could work a second vessel right now.’

Along with the Q4000, Helix’s intervention assets include the Seawell, a DP2 multipurpose vessel stationed in the North Sea, and the MSV DP2 Well Enhancer, which works the North Sea and West Africa (OE last month). The company also has an intervention program in the Australia and Asia Pacific region that uses a 73/8in subsea intervention lubricator installed on a vessel of opportunity. The system is mainly used for multi-well campaigns.

Although a number of smaller monohull vessels have entered the market, drilling rigs remain the operators’ vessel of choice for intervention, mainly out of convenience, Kratz says. But that is changing.

‘The industry is waking up to the fact that drilling rigs were designed to do one thing really well – that’s to turn pipe to the right,’ he says. ‘Everything else they do, in addition to intervention, all these things can be done more efficiently by an intervention type vessel.’

What falls under the intervention umbrella covers a lot of territory, and can include a range of vessels, from small monohulls to large semis. ‘And there are pros and cons to both’ vessel types, he says. ‘Of course, the industry wants to lower costs, lower day rates, and that leads everyone to start thinking about monohulls. Monohulls are very limited, though, in their application to intervention. So for the lower cost you give up a lot of capability.’

Putting a smaller vessel into subsea well intervention service ‘is an attempt to focus on a very specialized application in intervention,’ Kratz continues. ‘In order for that to be successful, you’re going to have to have a wellhead count requiring that application enough times to generate utilization.’ Helix opted to go with the newbuild semi because the company deemed it less risky than a more specialized vessel, he says.

‘The market is growing right now. I would say that the well intervention market is in its absolute infancy.’ Only four operators – Total, in West Africa, Statoil in Norway, Shell and BP – have wellhead concentrations large enough to require full-time intervention services. ‘Beyond that, it’s very much a spot market,’ he says.

Initial plans call for the Q-Plus to operate in the Gulf of Mexico. The new semi will have about one-third more deck space than the Q4000, which was originally designed for subsea construction and well intervention. A cantilevered deck was added to the Q4000 to increase deck space, along with other modifications, as the vessel’s emphasis shifted to intervention.

‘We’re talking to producers in different regions’ about deployment outside the Gulf of Mexico, Kratz says of the new vessel. ‘Hopefully, this will just be the first one. When we built the Q, the plan was to build three or four (similar units). We were just way ahead of the market. And now the market is there.’

Such a large investment ‘still takes, I think, a little bit of a leap of faith’, he continues. ‘But I think that’s where our track record gives us an advantage over a lot of others. It’s not a market niche that a company can just turn around tomorrow and say, you know what, we’re going to be in it.’

The Q-Plus will feature all-AC thrusters and will carry the same 4410 ton deck load as the Q4000but with a wider air gap, Kratz says. The Q-Plus will have a 34,000 ton displacement, compared to the Q4000’s 22,000 tons. ‘Select people’ from the Q4000 crew were involved in the design, which builds on HESG in-house engineering, he says. Sweden’s Bassoe Technology is providing additional engineering services. The semi will be built at Sembcorp Marine’s Jurong Shipyard.

Kratz says it is ‘a matter of time’ before a full-service intervention vessel is dedicated to the Australia region. Petrobras has indicated that it could one day need as many as six vessels for work in Brazil, Kratz says. For now, both regions are challenging to HESG’s business model. Australasia, he says, is ‘a huge potential market’ but sprawling geography and strict labor and local content rules complicate matters. ‘We don’t make money down there,’ he says. ‘The question is, how long is it worth doing that just to have a presence, or is it better to concentrate on other regions and then go there when the time is right?’

Brazil, another promising market, poses similar challenges. While Helix is ‘in constant communication with [national oil company] Petrobras’, Kratz says, ‘we’re not going to spend money to go and fight for the Brazilian market. I’d love to be there, but only if we can make at least a return. We have more opportunity than we have balance sheet right now, so I’m not going to sweat the hard markets until we dominate the easier ones.’

As for his assertion that the intervention market is in its infancy, he says: ‘As we’re going into deeper water, the technology is always getting challenged. So there’s new technology, new methodologies and new products being developed that make the vessels capable of doing more and more. The wellhead count is increasing exponentially and the existing wells are maturing, which increases the amount of intervention required. All of that combined just means we’re just at the tip.

‘But also we’re at the beginning of where the producers are accepting non-rig alternatives,’ he continues. ‘We’ve built the credibility now, with the methodologies and our assets, that the producers are now comfortable with us doing it, rather than a rig. And it was not easy to get that to happen.’ Historically, he says, intervention was predominately P&A: ‘end of life stuff’. Now the emphasis is increasingly on production enhancement, where technology continues to evolve. ‘Then you’ve got the future markets – the top hole, the riserless drilling, open water completion – you’ve got a lot of things that aren’t even being done yet. You add all that together and we’re just at the very beginning of the intervention market.’

With the Q-Plus, Helix is signaling its intent to aim for the high-end intervention segment. ‘There will be producers who are going to give some companies a shot at a low-ball approach,’ Kratz says.

‘We don’t really focus on that. We just figure that, in the ultra-deepwater, high flow rate wells and this regulatory environment, there’s always going to be growing demand for the high-end solution.’ OE 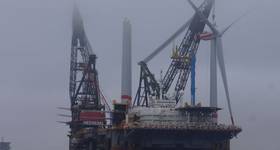