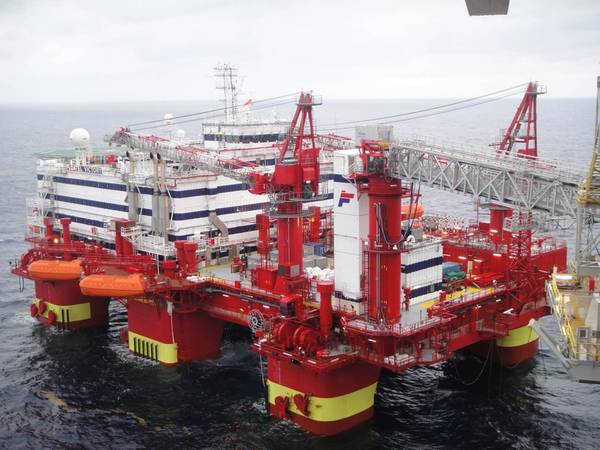 Semco Maritime was chosen to prepare the Floatel Victory accommodation rig for a new assignment for Maersk Oil in the UK sector. Photo: Courtesy Semco Maritime
Semco Maritime has won the contract to upgrade the Floatel Victory accommodation rig. Following the upgrade, the rig will sail out to undertake a contract in the British sector of the North Sea for Maersk Oil UK. Floatel Victory, owned by Floatel International, is expected to call at the Semco Maritime rig yard at Hanøytangen, Bergen, at the beginning of June after expiry of current contract with BP.
”We are pleased that Floatel International has chosen us for the assignment. This is an important order for Semco Maritime’s rig yard at Hanøytangen. The order also confirms the increased activity in the market of rig upgrades, which started in the second half of 2017. The signs are positive and give rise to optimism in the market”, says Senior Vice President Lars Skov, Semco Maritime Rig Projects.
“After an evaluation of tenders, Semco Maritime was appointed the successful contractor. We are looking forward to a strong and successful cooperation with Semco Maritime on this project, which is an important milestone before the rig starts operations in the British sector,” says Frederik Arnoldsson, Rig Manager of Floatel Victory.
Ready for rig arrival Floatel Victory is currently operating in the Norwegian sector. Even while the rig is on the way to Semco Maritime’s rig yard at Hanøytangen some internal jobs are made on the rig. In this way, the dock time is significantly reduced and the upgrade optimized and streamlined, which is important as the rig's time for repair is limited.
“A team of 10 people are currently projecting and planning the assignment. In addition, we expect to employ a good 150 people for the actual work of upgrading the rig.
The modern semi-submersible rig, which has living quarters for 560 persons, has 40 single bed cabins and 260 two men cabins. Each cabin is fully outfitted with en-suite bathroom and telephone/ IT/TV connection facilities.
The rig was built in Singapore in 2013 and is designed for operation in areas with hard weather and water depths up to 150m.
Contracts Offshore Energy