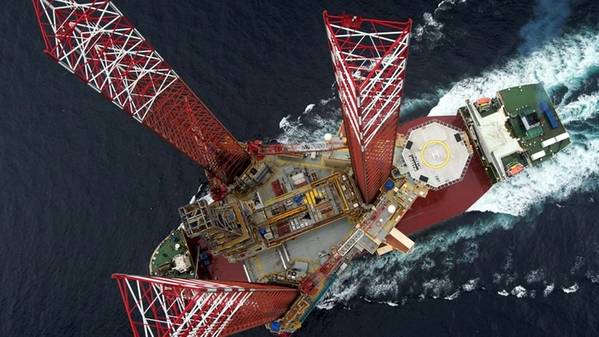 Maersk Drilling announced that Equinor has exercised two options of two months each for the Maersk Intrepid jack-up rig to continue working at the Martin Linge field offshore Norway.

In addition, the parties have signed a further two-month extension in direct continuation of Maersk Intrepid’s current contract, which in total will keep the rig on contract until the end of August 2020. The options and extension have a total contract value of USD 60m.

During the contract period, Maersk Drilling will complete the previously announced series of upgrades of Maersk Intrepid to turn the jack-up into the first hybrid, low-emission rig and set a new standard for low-emission drilling on the Norwegian Continental Shelf.

The upgrades combine the use of hybrid power with low levels of NOx emissions, adding data intelligence to further reduce energy consumption and CO2 emissions. The project is supported by a grant from the Norwegian NOx Fund, and by Equinor’s decision to introduce compensation formats to stimulate emission reductions.

In addition to the hybrid power and low-emission upgrades, Maersk Intrepid will be outfitted with the NOVOS drilling system, further enhancing the rig’s digital profile. The system assists the driller in executing processes consistently and enables interfacing with third-party advisory algorithms to enhance drilling performance.

“We are proud to continue supporting the development of Martin Linge. It’s great to be able to continue our long-standing cooperation with Equinor, to expand this with the ongoing hybrid, low-emission rig project, and by implementing drilling automation to prepare for the future,” says Morten Kelstrup, CCIO of Maersk Drilling.

Maersk Intrepid is an ultra-harsh environment CJ70 jack-up, designed for year-round operations in the North Sea. It was delivered in 2014 and has been operating in Norway ever since.