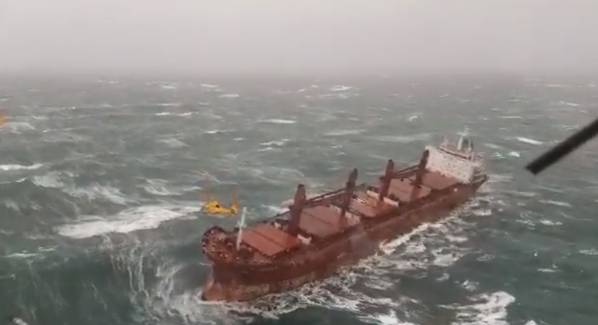 A cargo ship was cast adrift by storm Corrie on Monday in the Dutch North Sea, in the area where grid operator TenneT is building two transformer platforms (Hollandse Kust Zuid Alpha and Beta) for the connection of the offshore wind farm Hollandse Kust Zuid that is being built by Vattenfall.

"TenneT is currently working on the Hollandse Kust Zuid Alpha platform. Fortunately, the situation was safe for the 100 or so employees present and there was no need to evacuate," Tennet said Tuesday.

However, Tennet said that later on Monday afternoon, the adrift cargo ship collided with the Beta jacket (the foundation of the platform).

"No people were working here at the moment. As soon as the weather conditions allow, the situation at the jacket can be examined more closely," Tennet said.

"During the design and construction of our jackets, scenarios are made for a ship of limited size to collide with the jacket. Further investigation will determine the impact of this collision," Tennet added.

"TenneT will send a team to inspect the Beta jacket for any damage as soon as possible. Pictures will be taken from a ship. On the basis of this visual inspection, it can be determined whether further investigation by experts on the jacket itself can be safely performed. The visible and non-visible damage above and below water level must be fully assessed to determine whether, and if so what repairs are necessary.

At this moment we can therefore not make any statements about possible damage or the consequences for the delivery of the transformer platform Hollandse Kust Zuid Beta. We expect to need approximately two weeks to analyze the damage and make a plan for any necessary repairs," Tennet said.

While Tennet did not name the ship that had gone adrift, according to available info the vessel in question, the Maltese registered Julietta D. cargo ship, bound for Amsterdam from Germany. The vessel on Monday also collided with an oil and chemicals tanker. After an hour-long rescue operation with helicopters, the coastguard reported that all 18 crew members were taken off the vessel, Reuters reported Monday. 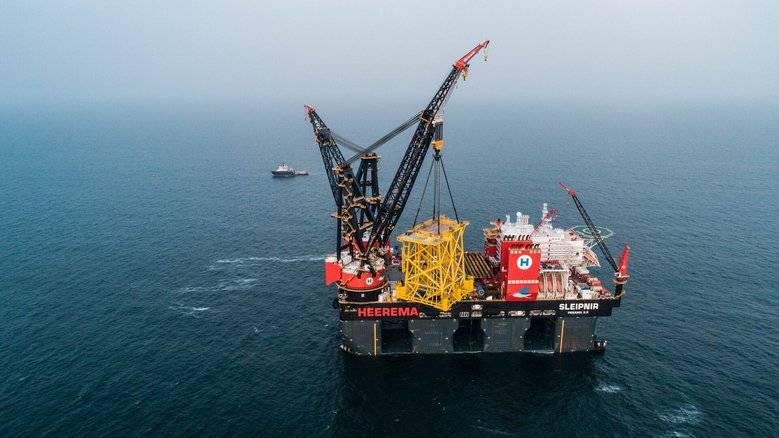 A Tennet jacket before the installation ©TennetBoskalis to the rescue
Dutch marine services company Boskalis said separately on Tuesday that it had successfully salvaged the rudderless cargo vessel Julietta D off the Dutch coast in cooperation with Multraship.

" The vessel ran into trouble during yesterday's Storm Corrie. The Julietta D was anchored off the coast of IJmuiden (the Netherlands) but got into difficulty when its anchor chain broke, causing it to collide with another ship. After the collision, the Julietta D was taking on water and the crew members were evacuated by helicopter. The ship then drifted towards the coast of Scheveningen and collided with an offshore platform," Boskalis said.

The Sovereign, a large Boskalis tug, arrived on the scene Monday at around 16:00 hours CET, followed soon afterward by four salvors from Boskalis’ salvage division, SMIT Salvage, who were airlifted onto the Julietta D by helicopter.

According to Boskalis, at around 18:30 hours the first successful towing connection was made, preventing the vessel from running aground on the Dutch coast. The Julietta D was then pulled further out to sea as a precaution, waiting for an additional tug.

At around 19:00 hours, the tug Multratug 18 of partner Multraship also made a towing connection, but due to the very rough conditions this connection, unfortunately, had to be severed. Today at around 01:00 hours the Manta, a second large Boskalis tug, loaded with salvage equipment and an additional team of salvors was on site, after which a second towing connection was successfully made after sunrise. This secured the Julietta D and the vessel is currently being towed to the port of Rotterdam where it is expected to arrive early in the afternoon, Boskalis said Tuesday.

"In addition to its own staff on board the tugs and Julietta D, Boskalis would also like to thank its partner Multraship, the Dutch Coast Guard and its helicopter crews, The Royal Netherlands Sea Rescue Institution and its crews of the search and rescue vessels, and the Port of Rotterdam," Boskalis said.

According to the Dutch Coast Guard, the vessel arrived at the port of Rotterdam at around 13:45.