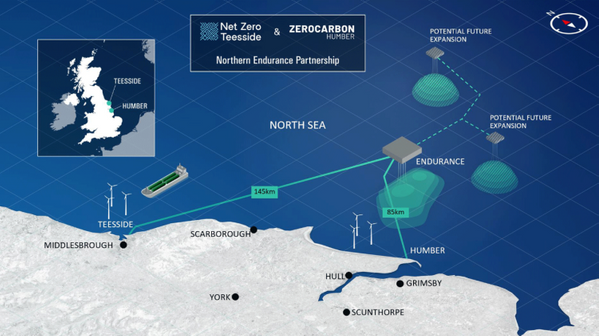 "This ‎infrastructure will serve the proposed Net Zero Teesside (NZT) and Zero Carbon Humber (ZCH) ‎projects that aim to establish decarbonized industrial clusters in Teesside and Humberside," BP, which will serve as the operator of the partnership called the Northern Endurance Partnership (NEP), said.

Net Zero Teesside and Zero Carbon Humberare at-scale decarbonization projects that will kick start the decarbonization of industry and ‎power in two of the UK’s largest industrial clusters.

Both projects are expected to be commissioned by 2026 ‎with pathways to achieve net-zero as early as 2030 through a combination of carbon capture, ‎hydrogen, and fuel-switching.

"If successful, NEP linked to NZT and ZCH will allow decarbonization of ‎nearly 50% of the UK’s industrial emissions," BP siad.

According to BP, the Northern Endurance Partnership has submitted a bid for funding through Phase 2 of the UK government’s Industrial ‎Decarbonisation Challenge, aiming to accelerate the development of an offshore pipeline network to ‎transport captured CO2 emissions from both NZT and ZCH to offshore geological storage beneath the ‎UK North Sea.‎

The £170 million Industrial Decarbonisation Challenge is part of the £4.7bn Industrial Strategy ‎Challenge Fund set up by the UK government to address the biggest industrial and societal challenges ‎using research and development based in the UK.

"NEP’s application for funding is an important step ‎towards enabling the development of integrated offshore carbon storage for NZT and ZCH in the UK ‎Southern North Sea," BP said.

The application follows the approval by the Oil and Gas Authority (OGA) of the addition of bp and ‎Equinor alongside National Grid to the Endurance carbon storage license.

"This affirms the strategic ‎importance of the Endurance reservoir as the most mature large scale saline aquifer for CO2 storage ‎in the offshore UK Continental Shelf, that can enable industrial decarbonization from both clusters," BP said.

Grete Tveit, senior vice president for low carbon solutions at Equinor, said: “Carbon capture and ‎storage is a crucial technology for reaching the goals of the Paris Agreement and we are committed ‎to working with others to create real change. We believe that with our partners in the Humber, ‎Teesside and the Northern Endurance Partnership we can deliver deep decarbonization of these ‎major UK industrial clusters using CCUS and hydrogen, safeguarding jobs and helping develop world-‎leading low carbon expertise that can play a leading role in the UK’s journey to net zero by 2050.”‎ 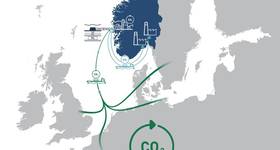