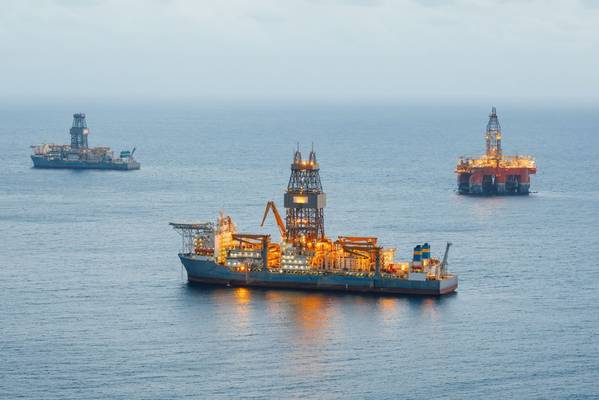 After the long, slow downturn that began in late 2014, this year was set to be better with many dormant regions resuming exploration and long-awaited development drilling programs going ahead.

Then in mid-March, a double disaster struck as an oil price crash coincided with a global pandemic. This double whammy left many operators hitting the brakes, slashing budgets, and deferring those long-awaited programs meaning contractors found themselves receiving dozens of contract termination notices.

There have been 43 rig contract terminations globally since the beginning of March this year.

Both Northwest Europe and West Africa have been hit the hardest with 11 terminations apiece.

Both regions have seen a significant hit to their jack-up fleets with six terminations in Northwest Europe and seven in West Africa.

Few regions have been immune from terminations, however, with Canada, the US Gulf of Mexico, Latin America, the Mediterranean, Middle East, India, Southeast Asia, and Australia/New Zealand all seeing their fair share of canceled contracts.

Ultimately these cancellations give an indication of how activity levels are set to shape up in the near future both regionally and globally including which sectors, either region or rig type, have been hit hardest. The wider effects of this downturn are yet to be seen, however, contractors already report that re-bidding exercises for ongoing tenders have been undertaken and negotiations to reduce rates on ongoing charters are also underway.

A pick-up in supply means sustained downward pressure on day rates for the foreseeable future unless action is taken to remove yet more capacity from the fleet. Contract cancellation data is used by contractors when deciding the future of their fleets. An increase in supply, especially a dramatic increase, is not sustainable and so, decisions to retire and scrap older units are being made more quickly.

In the last downturn, jack-ups were the first rig segment to be hit with contract terminations and it is a similar story this time around, albeit with semis following close behind. This is reflected in the number of attritions we see in the marketplace.

The current downturn has already resulted in a number of jack-ups and semis retired from the fleet with older units, particularly semis, hitting the scrap yards. Thus far in 2020, a total of 12 semis, five jack-ups, and four drillships have left the worldwide fleet. While there is still a significant oversupply, particularly in regions such as West Africa, removing these older units takes at least some of the pressure off. 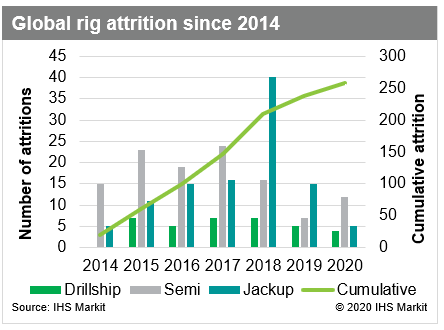 Despite these cancellations, there is light at the end of the tunnel. A number of these programs have not gone away with operators stating that there is potential for work to re-emerge at a later date if the oil price is suitable.

Already the market has seen some decisions to reverse early terminations while yet more operators, particularly in the deepwater sector, have made the decision to place rigs on standby to see out the coronavirus (COVID-19) pandemic rather than cancel outright.

The offshore drilling market has shown that it is resilient and there is optimism that once the pandemic is over, some of those canceled programs will become reinstated.

Sarah McLean is a senior rig analyst at IHS Markit. Her primary expertise includes the offshore rig markets across Africa, the Mediterranean & Black Sea and the Caspian regions.